Book Review - The Boy with the Perpetual Nervousness 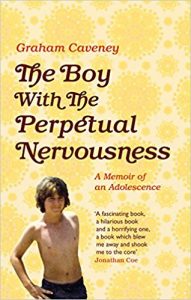 At the age of fifteen, in 1980, at St Mary’s RC Grammar School in Blackburn, Graham Caveney was sexually abused by his headmaster, Father Kevin O’Neill. Caveney’s subtitled Memoir of an Adolescence starts with this fact, as how could it not? The trauma is ‘something that the survivor, the sufferer, carries within them; the wreckage that is part of their self.’

What Caveney brilliantly achieves in this powerful, distinctive memoir is the positioning of his repeated sexual abuse in the landscape of an early 80’s adolescence. Before the abuse, Caveney is a clever, bookish boy born into the ‘Respectable Working Class’ of Accrington, his dad a groundsman at the local comprehensive and his mum a factory worker. He is not at that time nervous, and for the most part neither is this book, which is by turns honest, angry, funny, thoughtful, acerbic and desperately sad.

The slightly perplexing title does say something about the innocently pretentious teenage years Graham Caveney might have had, if it weren’t for an abusive priest. The title is from a 1980 song by cult New York guitar band The Feelies, themselves named after the mass entertainment promised in Aldous Huxley’s 1932 novel Brave New World. At his grammar school Caveney was intent on saving himself from traditional provincial brain-death with ‘Upper Case Literature and lower case music.’ He discovers Oxfam overcoats, ‘bad poetry, Beckett and dread.’ In those days teenagers took their sulking seriously – were Franz Kafka or Joy Division having a good time? They were not.

This book review was published in the Times on 26th August 2017 and the full text is available here, possibly behind the paywall unless you never look at the Times, in which case you have two free articles of which this could be one.