The Day That Went Missing 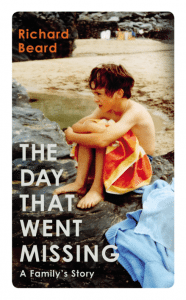 On a family summer holiday in Cornwall in 1978, Nicholas and his brother Richard are jumping in the waves. Suddenly, Nicholas is out of his depth. He isn’t, and then he is. He drowns.

Richard and his other brothers don’t attend the funeral, and incredibly the family return immediately to the same cottage – to complete the holiday, to carry on. They soon stop speaking of the catastrophe. Their epic act of collective denial writes Nicky out of the family memory.

Nearly forty years later, Richard Beard is haunted by the missing grief of his childhood, and sets out on a pain-staking investigation to rebuild Nicky’s life, and ultimately to recreate the precise events on the day of the accident. Who was Nicky? Why did the family react as they did? And what actually happened?

“A book of consistent astonishments … Beard is one of our most accomplished authors, and this is perhaps his most readerly book, in that it is all about decoding and deciphering, interpreting and imagining. But it is also just stricken.” Stuart Kelly, The Scotsman

“A monument to the power of literature … a wonderful memoir but also a salvage operation in which he writes himself back into life. His book deserves to stand on the same shelf as William Fiennes’s The Music Room, as a remarkable homage to a lost brother.” Nicholas Shakespeare, The Spectator

“An absorbing, unsettling and at times painfully difficult read … an important examination of grief and denial and the huge damage caused by the idea that feelings and emotions are something best packed away and ignored.’ Charlotte Heathcote, Daily Express

“A touching, painful disquisition on memory and forgetting and the tendrils that tie us to the past.’ Caroline Moorehead, Guardian

“This captivating book, both heart-rending and jaw-dropping, unfolds like a detective story.” Brian Viner, Daily Mail

“This memoir breaks all the rules. It’s brimful of anger and guilt, fails to deliver an uplifting ending and opens with a death … This is the stuff of true grieving and remorse, the acid peel of genuine soul-searching, whose sting few of us are capable of bearing. And it sings.” Marina Benjamin, New Statesman