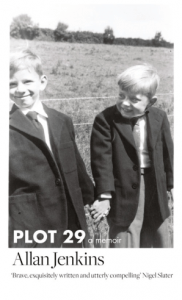 At the age of 60, when he sets out to write this memoir, Allan Jenkins is older than his mother and his brother when they died, ‘time near my end to unravel my beginning.’ At first, the omens aren’t good: all he sees are memories that ‘stir like crocodiles.’

In this particular family, the past needs to be approached with caution, but fortunately for Jenkins he has a place of safety from which to start: his London allotment, the Plot 29 of the title. His memoir of a disrupted childhood is structured to alternate with a gardening diary that takes in eighteen months of sowing and reaping from June to the following December.

Throughout, the green refuge of the allotment has an explicitly therapeutic function – ‘The path and plot are cleared and so is my head.’ The allotment provides ‘chemical-free medication’ and a ‘repeat prescription’. It is Jenkins’s inoculation against distress of all kinds, though most of the trouble here is rooted in a troubled upbringing.

Jenkins gradually unearths a younger self shadowed by neglect and abuse, as he and his older brother Christopher are passed around adults whose love is always conditional. In and out of care as young boys, they are eventually fostered by a childless couple who live in a picture-book Devon cottage. After ten years the foster parents give up on them. Jenkins remains unadopted, a disappointment, having forgotten that ‘love must be exhaustingly earned every day like a salary.’

The reader, like the writer, is grateful for a regular escape to the tranquil allotment. The pacing of the contrasted sections is expertly judged, and the seasonal demands of Plot 29 keep Jenkins from ever having to stay too long on the page, or in life, among the lingering sadnesses of his past.

Nevertheless, he keeps on digging, and his research into his early life becomes urgent and utterly compelling. His childhood emerges in clean, powerful prose as if Jenkins – as an adult, the former editor of Observer Food Monthly – has gone up and down the rows of his sentences, doggedly hoeing out the weeds, creating the space for his previously buried self to grow towards the light.

The sense of immediacy generated by his carefully tended writing is astonishing, from descriptions of the almost-idyll in Devon to regrets about his strained relationship with his brother. Christopher is ‘better at being a boy’, and uses his fists where Allan relies on his wits. These are much in evidence as he tracks down his surviving family and whatever documents can be salvaged from the bureaucracy of institutionalized care. Jenkins discovers ‘unsettling layers of grime’, in his case a child delivered to a Plymouth care-home with an official record of scabies, herpes, rickets and TB, every malady of the unloved.

Back in his allotment Jenkins gardens with his gloves off, he tells us, even in December, and he’s equally harsh on himself when stripping the past. His book is unsparing in its eye for the injustices of a less enlightened era, including his brother Christopher having his left-handedness beaten out of him. ‘Christopher is good at being hit.’ In Devon the vicar and the local policeman consider the fostered boys suspect – they are of unknown seed, and therefore can’t be trusted.

Jenkins cultivates these memories, going over and over the ground, retrospectively justifying himself to his brother Christopher, and with intermittent courage attempting to identify his biological father. He saves some of his most powerful insights for his mother: ‘She was a shell by the time we met. A host to something dark. You could almost see it lurking, lazy, comfortable, dangerous, in her shadows.’ She is the mother of all crocodiles.

To counteract the darkness and danger, regular trips to Plot 29 provide a dependable sanctuary, and without them this memoir might have become an impossible read, an unachievable life. Jenkins constantly reminds himself of the value of the allotment: ‘I don’t know what I would have done without it. The healing would have been slow. When I have been troubled, when I need to be alone, it has been there for me.’ He finds rapture in Plot 29, and the ‘home in homegrown’, the reliable home he never had as a child.

The book finishes with a summer family barbecue in the garden of his daughter’s London house. It is written as a personal vision of Eden, a localized paradise that Jenkins has helped to plant and grow. As a memoir, Plot 29 is ultimately a triumphant story of how to learn to love, starting with plants, ‘something alive without legs to look after’. Eden is therefore a fitting place to end, completed by a love that feels distinctively human.