Harry Mathews in the CIA 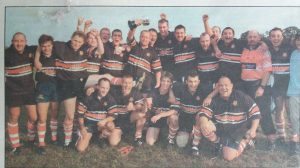 What connects the CIA, Somerset’s Midsomer Norton Rugby Football Club and 1970s experimental literature in Paris? Easy. The answer has to be Harry Mathews. At least, it’s easy for me, because I’m the other connection.

The novelist Harry Mathews, the “American Oulipian” who died earlier this year, was an entertaining and reliable correspondent. I could expect letters in fountain pen, on heavy engraved paper, from any of his four addresses. In the early 2000s he would update me on his novel My Life in CIA: A chronicle of 1973. “Part non-fiction, part fiction”, he let me know from New York; “I have a feeling the French will get more of a kick out of it than my fellows here”.

Back in Midsomer Norton …