National Poetry Day: Live the Life of a Poet 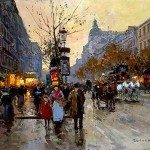 My French editor, a poet who’d slipped into publishing because poetry doesn’t pay, was a former colleague from the old Bibliotheque Nationale on the Rue de Richelieu. I worked in the galleries, he was Maps and Stamps, though his true interests were poetry and the spirit of ’68.

He had in mind a verse epic about Paris and life on the Grands Boulevards, the contemporary everyday bursting with ghosts. He had a greedy eye, and could be distracted by fleeting impressions and chance events, so much so that he often forgot to inject himself with insulin. This meant he was forever scurrying into the toilets of a MacDonalds, a syringe between his teeth. Someone would call the police.

When he forgot his insulin his speech slurred and his eyes rolled and the police beat him for being a junkie. Because he was a poet, his soixante-huitard letters of complaint to the Prefecture were full of extravagant words and easy to ignore.

He married late, and for a while displaced his poetic energies into a shop conversion in the ninth arrondissement. He was getting older. The last time I saw him he took me to Chartier, but I had no feel for the poetry of queuing, or the famous cheapness of the Chartier food. I took him to Le Recrutement instead, a rugby bar in the seventh.

We ate much better there, and he told me how married life was a pain to him. His discontent centred on the prosaic failings of a laid table. ‘She puts out a knife’, he said, ‘she puts out a fork. Every single day.’ He was planning an escape to Switzerland, where at the age of nearly sixty he’d get a job washing pots while writing poems about sex workers he’d contacted on the internet.

I could feel his anguish but thought he must be joking. ‘Live the life of a poet,’ I said.

A week later he was found dead in a forest outside Geneva. He’d taken a huge overdose of insulin, or none at all, I don’t know for sure, but he was found by a walker in a closed-off area: No Rambling Beyond This Point. The walker didn’t call in the body for several days because he was scared of getting into trouble.

I remember another friend, from school. I recently looked him up because he was the best of the writers our age. He had the soul of a poet, definitely, but on the internet I found him as a lawyer. Then he left London to run a farm in Yorkshire. It was the new start, the new stanza beloved of poets.

Two years ago, in his mid forties, he was married. Three weeks after the honeymoon he went to an outhouse with a shotgun and shot himself dead.