Acts of the Assassins - Quantum Fiction 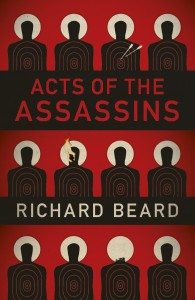 Start looking and it’s everywhere. Kate Atkinson is at it, and Jenny Offill and Anne Carson. CSI: Crime Scene Investigation is full of it, as is the first season of Homeland, and David Lynch has been working on it for years. Jo Nesbo might be, John le Carre is. The poets, some might say, found their way to it first.

Our ideas about the physical world are changing. Quantum particles exist in multiple states simultaneously, they act on each other at a distance and the road not taken is the road taken. Fiction has always reflected the world we inhabit, and in a quantum story individual narrative components behave outrageously.

But as in physics, the overall solidity of the fiction remains intact.

At its simplest, the quantum concept breaks up a narrative into quanta, short bites of information rather than extended narrative passages. These may resist a single objective view of reality. In Lazarus is Dead the story divides into particles of separate fiction and non-fiction, but in Acts of the Assassins the novel isolates particles of time.

The quantum split in Acts merges the past with the present, creating a fiction that reaches for glimpses of the invisible behind the accepted laws of linear narrative. The novel doesn’t conform to a conventional reading of time, but behaves according to quantum theory. What happened then happens now, and vice versa.

Quantum fiction isn’t entirely new. Like the particles, these fictions existed before they were observed and named, but before now we didn’t know what to call them. The Book of Revelation is, but Will Self probably isn’t. Joyce is, but Beckett isn’t, while detective fiction and spy stories are among the most rewarding places to look. Try your own list – nothing more quantum than starting an argument in an empty room.