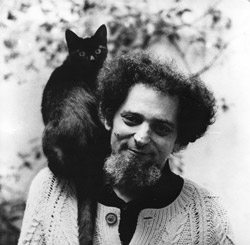 Tomorrow is the 30th anniversary of Georges Perec’s death, a date I wouldn’t have noticed without this informative blog from France 24 journalist Oliver Farry. Which made me come over all Je me souviens …

Twenty years ago to the day, in 1992, I remember I was at an event for the 10th anniversary of Perec’s death. Ten years! He was barely dead at all. I’ve been thinking about this event a lot, especially since last year’s Booker debate about Difficult Books.

For anyone who missed it, a couple of the judges for the 2011 Man Booker Prize were perceived as making a distinction between books that were easy to read and books that were difficult. In 2011 (and it might be the other way round in 2012) easy books were considered superior. The discussion was hard to evaluate because ‘easy’ and ‘difficult’ are such contingent terms.

Which was not the case at that celebration of Georges Perec somewhere in Paris one evening in 1992. It was in a lecture hall, I forget where, possibly in the New Sorbonne. Censier? Jussieu? Not Jussieu, because that was another time when we went back to Mrs Perec’s flat in the Rue Linné with Marcel Benabou and some mathematicians. The flat was exactly as described by David Bellos in the biography, each room leading on from the next like compartments in a train carriage.

The setting for the event feels like a University, in my memory. There was a bank of seats rising above a stage, and perhaps 200 of us in the audience. Perec wasn’t as popular then as he is today, and to keep our attention the evening was split into alternate parts. Mainly, a panel of three literary academics would talk to a literary journalist about Perec’s work.

I know. That’s why they felt they also had to call on the French actor Michael Lonsdale (last seen by me as the kindly monk in Of Gods and Men). Lonsdale performed some extracts, I think mostly from Quel petit vélo à guidon chromé au fond de la cour?

Then the academics and the journalist started. They agreed that Perec was utterly brilliant. So far so good. They disagreed on why this was so – that’s their training, seven years for a PhD to prove they can convincingly differ from others. At some point, they did start to agree. They all agreed, with some satisfaction, that Perec was difficult. Of course they did – if he weren’t difficult he wouldn’t need their academic explanations.

But this is what I remember from the evening. The panel lingered on how difficult Perec could be, and someone shouted ‘Non!’ On and on went the academics. ‘Pas vrai!’

There was a restlessness, a shuffling in seats, as at an obvious injustice. Perec was innocent but he was being escorted from the stage under guard, and not gently. The booing started. The academics should not be allowed to get away with this, to get away with Perec. We were all there in our various versions of Paris as readers, none of whom had found Perec difficult. He is fun, engaging, a writer who winks and grins from every word on the page.

The academics may have won by now, twenty years later. They’ve taken Perec away and confined him in a spurious sense of difficulty, just as they first dared to do when he was safely ten years dead. They miscalculated. Ten years after his death, Perec was not yet difficult.