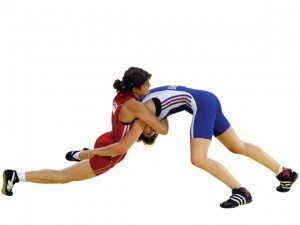 By the end of this July’s ‘second chance sale’, over three and a half million tickets had been sold for the 26 sports making up the London 2012 Olympics. There were seats unsold for football and volleyball, but the only individual discipline with tickets left over was freestyle wrestling. In the competition for least-loved Olympic sport in Britain, freestyle wrestling was the winner.

What is it, exactly, that no-one is in a rush to see? Freestyle wrestling differs from all-male Greco-Roman wrestling (sold-out) in three ways. Holds below the waist are allowed, the legs may be used in both attack and defense, and since 2004 the sport has included four weight-categories for women.

Not enough, it would seem, for a nation of discerning sports-fans, even though the highlights play well to rock music. The crisis moment of a freestyle bout is a flurry of explosive athleticism, bodies driven hard into the ground and wrestlers in barely credible contortions, legs awry and ears cauliflowered to the mats.

In 3000 years the objective of a wrestling contest has barely changed – to overpower and gain total control over an opponent. This can take a while. A bout at the 1912 Olympics lasted eleven hours and forty minutes, which led to the introduction of a points-scoring system. Points require rules: wrestling would never be so simple again.

At London 2012 the freestyle wrestlers will grapple on a circular area nine meters in diameter for three two minute sessions in a best-of-three contest. If a session ends in a draw, there is a thirty-second tie-break mechanism called The Clinch. The attacking wrestler locks his arms around one of the defender’s legs and has thirty seconds to make a decisive move. This is more complicated than it looks.

The Clinch was not a feature of wrestling as first recorded at the Olympic games of 708 BC. This was a direct hand-to-hand contest to discover the fortius in the Olympic refrain of Citius Altius Fortius (Faster Higher Stronger). It soon became evident that in wrestling ‘stronger’ requires brain in addition to brawn, strategy before a fall. The philosopher Plato (meaning ‘broad’) was a keen wrestler, and his name may have been decided by his wrestling coach.

As a sales angle, the cerebral side of wrestling doesn’t appear to have worked. The chief executive of the British Wrestling Association, Colin Nicholson, calls freestyle wrestling ‘combat chess’, and while the combat can be astonishing the chess is a problem. The technical manoeuvring for a hold or a takedown registers in minor shifts of balance and leverage, almost imperceptible to the casual spectator. The psychological battleground, so vivid to the competitor, is masked by stoicism and concentration.

‘We’ll have at least three wrestlers involved in London 2012 because of the wildcard entries for the host nation. Unfortunately, for each wrestler we qualify by right we lose one of those places, but our objective is at least one top-eight finish.’

Televised wrestling has always understood the importance of personalities. At London 2012 the British wrestler to watch is Ukrainian-born Yana Stadnik, a 48 kg silver medalist at the 2010 European Championships. For the men, Britain’s  top freestyle hope is Bristol’s 96 kg fighter Leon Rattigan.

Olympic success can revive an obscure sport – curling is the most obvious recent example. The next best shortcut is to get a sport into schools. All sports administrators know this, but wrestling has the advantage of needing little or no equipment. It is more controlled than boxing but can claim similar benefits as a self-help sport – encouraging self-control, self-confidence, self-esteem. The British Wrestling Association can plausibly claim that wrestling leads to ‘greater physical development’ (muscles! – wrestlers are ripped), ‘flexibility, strength, balance, co-ordination and razor-sharp reactions’.

If Olympic medals and school sportsdays remain a distant ambition, the fate of wrestling is more likely to be influenced by immigration. The arrival of fighters from Eastern Europe, a stronghold of world wrestling, can provide a solid base for future British participation and success. The Olympic pot currently pays for wrestling’s full-time chief executive, an administrator and a national coach. Five wrestlers have received funding. The brooms will be out after London 2012, but there is hope for spending rounds to come – wrestling will also feature at the Glasgow 2014 Commonwealth Games.

Between now and next August the wrestlers will be working hard at the British Wrestling Academy, a low-roofed single-storey gym in Salford (bookable for events). By then, the last seats at the Excel centre will surely have been sold, as this is a rare chance in Britain to see the world’s best compete at one of the original Olympic sports. Wrestling may not have fared well in the ticketing ballot, but it is a sporting truth that someone has to come last. Otherwise there would be no winners.