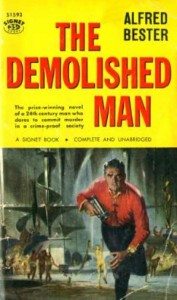 From The Independent Book of a Lifetime

In 1985 I bought a 30p second-hand paperback because I liked the title: The Demolished Man, by Alfred Bester. This fits into a rare category of novel – short science-fiction – and I read it during my first two days as a student. University promised friends, drinks, adventures, but I preferred life on Mars. On the third day, I read it again.

Since then, for me, The Demolished Man has become a comfort book. All writers should have them. Instead of reading for research, or reading to steal, there are books that recalibrate the original, childish joy of reading to escape. This in turn reignites the urge to write and, for me, The Demolished Man is one of those books. Geoffrey Household’s Rogue Male (1939) is another.

Both these short novels are full of vigorous action. The Demolished Man (winner of the inaugural Hugo award on publication in 1953) is an American cop novel set in the future, a genre combination later exploited by Philip K. Dick and William Gibson. For Bester, familiar police procedures are given an original edge because the investigating cop, Lincoln Powell PH.D 1, is a first grade ESPER.

‘Esper for Extra Sensory Perception … for Telepaths, Mind Readers, Brain Peepers.’ He knows and the reader knows right from the start whodunit. It was Ben Reich, evil industrialist (an ever contemporary touch) who lives by the flawed motto – `Be audacious, be brave, be confident and you will not fail.’

Powell’s challenge in the book is to trick the murderer into revealing his method and motives, because not everybody in the future can read minds. Reich himself, for example, attempts to outwit Powell by filling his head with a popular song and acting before he thinks. In this way the ripping pace of the book becomes part of what it’s about.

Each time I re-read the novel I’m impressed by the formal daring. Bester experiments with fonts and layouts to convey different types of unspoken thought, and his prescient characters include Sam @tkins, Jo ¼maine and the very sexy Miss Duffy Wyg&.

Not all his future projections have worn so well. Reich’s motives are stiffly dependent on Freudian theory, but most glaringly Bester fails to predict any type of feminism. The words girl and pretty always come as a pair.

My edition is the 1966 Penguin with the ugly Halloween cover and a glut of hard-boiled typos, and I doubt it will survive many more readings. If anything, the story itself gets younger – I’m now older than the characters, who in their late thirties once seemed impossibly experienced in the ways of the future world.

And however many times I re-read The Demolished Man, I never tire of the ending: ‘There has been joy. There will be joy again.’ Yes, I think. That must be so. It is 1985 and time to go out.