Papercut - James Joyce would have loved it 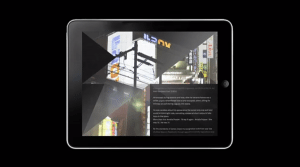 I did some of this

For every reader who bemoans the end of the book, there’s another announcing the advent of the future book. There are in fact two separate issues here. The first is how books are read (old-fashioned pages, Kindle, iPad) and the second is how books are written. I’ve offered my opinion on reading platforms here, but whether for Kindle or paper pages the writer’s job remains essentially unchanged. Characterisation in a hardback will also work as characterisation on a hand-held backlit reading device. New gadget, same old reading experience.

The iPad has more potential, both for readers and writers. The digital design studio ustwo recognised this some time ago, and used traditional nursery rhymes as experimental texts. By adding interactive animation, they were hoping to reach at a new way of telling stories.

Their Nursery Rhymes are quite fun, but they barely scratch the surface of artistic effects that the platform makes possible. What ustwo needed was some contemporary literature. Oh yes. Some writers who could answer back, and test the limits of the form. Length was the first consideration. It costs money to do this stuff, and therefore it seemed sense to start with short stories. Ustwo therefore teamed up with Shortfire Press, itself an interesting outfit that sells e-stories one-at-a-time over the internet. Shortfire Press had already made my story James Joyce, EFL Teacher available as a download, and this was one of three stories chosen for the experiment.

Jonas Lennermo at ustwo is the man who makes everything happen (you can see him making things happening, and giving his own explanation of Papercut here) and he explained to me the capabilities of the technology the company had developed. This was the essential step forward: as the reader scrolls the text down the page, sounds and images can be triggered depending on where the reader is in the story.

The initial idea was to take a story and then ‘illustrate’ it in this way. However, for me, the audio-visual element was more interesting than that – I immediately wanted to re-write the story specifically for this new medium, and that’s what I did. And I do think it’s a new medium for writers, somewhere between the page and a film. The imaginative leap, it seems to me, is to understand that the audio-visual additions aren’t there to illustrate the text. Too boring. They’re there to enhance it, but genuinely, to add something new. The writer should keep faith in the writing, and then use the sounds and images to play with the meanings and rhythms and connotations sparked by the text. The interactivity isn’t only a complement to the words – it needs to be allowed to contradict the story and play with it and make additional layers and jokes of its own.

My kind of writing has always had a low reliance on realist devices. It’s suited to this type of experimentation. And now that I have a working idea of how effective the Papercut technology can be, I see no reason why the next step shouldn’t be the first interactive iPad ‘novel’, written exclusively as a new form for a new format.

All three stories are included on the Papercut application available for iPad (£3.99).