Are you a Christian? 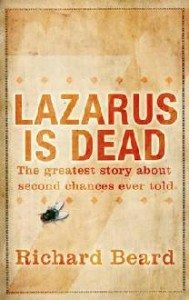 There was an extract from Lazarus is Dead in the July edition of Prospect magazine. When the magazine decided to run the extract this was their first question (as it had been the first question of an American publisher): are you a Christian? Admittedly, this story is a departure for me. The book is set in first-century Israel and although the structure is unusual (as readers of the earlier novels might expect) the book really is set in first-century Israel. Really. Most of it.

Lazarus is Dead is not a satire, even though my appearance at the Edinburgh Book Festival is listed in the print catalogue as a Religious Spoof – ‘God won’t like what he sees.’ I’m not so sure about that, but I am sure that a re-imagined bible story is difficult to classify, and can engender a kind of panic. The default assumption is that if a modern novelist re-writes a Christian story he must be mostly against. Then the book gets read, and the question changes.  Am I a Christian?

I shall probably be asked this question again, so thought I’d try to work out an answer here on the blog. The advantage of doing it here, of course, is that I can come back and edit whenever I change my mind.

Most recently, the Sunday Herald reviewer didn’t even ask. ‘Beard is not himself a believer,’ Chris Dolan decides, ‘but he enriches the dull, simplistic debate between bishops and imams and Dawkins and co.’ I was very glad to read this, as it was part of what I wanted to do (and Dolan is excellent on the ‘point’ of the book.) However, I don’t quite believe that I’m not a believer. So what am I? The more I write the more I realise I’ve done a lot of thinking before now that might once again be relevant.

I looked this up from Dry Bones, a description of a character soon after he leaves University. His Dad is a vicar:

‘Every evening he drove home from the city in his roadster with electric everything to a kitchen with a glass kettle, and by his second year in London, eating Japanese noodles on expenses, he earned five times as much as a vicar after twenty years on apologetics and paste sandwiches. Mason Senior wrestled with the divine secrets of existence. Tom Mason Junior bought from the bottom and sold at the top. Thine is the glory, Tom. Our Dad still had his uses: an Anglican vicar in the family could be good value, especially at dinner parties with Bachelors of Arts and Sciences, where not one highly paid graduate under the age of forty had progressed much further than not believing in god.’

This is what I believed some time ago (Dry Bones came out in 2004) and is what I believe now. Everyone should get to the stage of not believing in god. That’s the easy part, and also not the end of it.