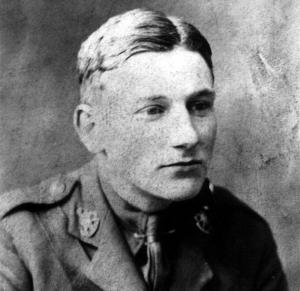 In 2003, I went to Japan as Visiting Professor at the University of Tokyo, a post that had evolved from the Professorship held in 1924 by the First World War poet Edmund Blunden. Blunden wrote the prose account of his wartime experiences, Undertones of War, in the shadow of the University’s grand Red Gate referring only to some trench-maps and his anxious unforgetting.

Blunden’s time in Tokyo was immensely productive, inspiring new poems, edited texts, critical commentaries. He also kept up with his beloved cricket (there is a separate chapter on Cricket in Barry Webb’s definitive biography). However, my own combination of interests meant that while teaching in his shadow I was presented with a literary scoop, or so I hope.

I had largely forgotten about this until now, but in one of my classes I had the pleasure of teaching Mr Iba, a mature student and former President of the Tokyo University Rugby Club. He had read Muddied Oafs, and enthusiastically introduced me to a spirited live version of the Tokyo University Rugby Club song. I was intrigued that it should be in English, and before long we were both researching its provenance.

We eventually discovered that the poem had been written in 1924 and presented to Mr Kayama, a rugby enthusiast who had written the first book about the sport’s development in Japan.

[A mini-extract, as kindly translated by Mr Iba:

1. We play Rugby to satisfy our Fighting Spirits sleeping in our blood.

2. But, We have to control it by our Gentlemanship.]

Blunden scholars will surely let me know if this lyric has surfaced in the past. If not, I hesitantly claim the rediscovery of a lost work by Edmund Blunden, two verses of poetry that remain a living force in twenty-first century Japan.

I hear from winters long ago

Resounding to the frosty sky

The splendid roar that hailed the try.

I hear from winters yet to come

And feel, when you and I are dumb,

Still Rugby will refresh the world.

Friend, may this book of yours advance

This noble sport in old Japan

Till your disciples take on France,

England, New Zealand; when they can,

May we be there to swell the cheers

That loud and brilliant will proclaim

‘Japan’s first try!’ In after years,

Could your heart wish a happier fame?

I hope I can contribute to the happy posthumous fame of Mr Kayama, who was an apostle for rugby in the early days in Japan. The optimistic, global sentiment of the last line of Blunden’s first verse also seems fitting in a World Cup Year. 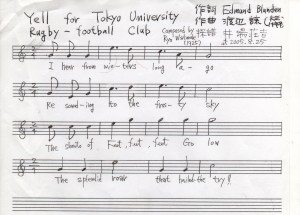 The poem is still sung boisterously to round off Tokyo University Rugby Club functions, to the tune shown here (and Mr Iba intends to have it sung at his funeral). The music was composed by Mr Ryo Watanabe, in 1925, so the song (or Yell, as it is now known by the rugby club) was written soon after Blunden’s arrival. Perhaps he had a few hours to fill: later he would design his own cricket net, and set it up in the local park to await visits from anyone who had ever held a bat.