Books vs Kindle is Gillette vs Braun 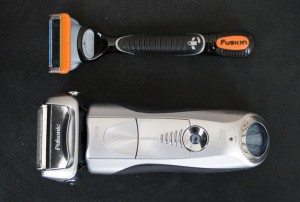 Not one or the other

At last. Christmas has gone away. Now that the advertising has died down, it might be a good time to say something reasonable about the Kindle, or at least more measured than their own trumpet-blowing that was everywhere during the gift-giving season. ‘Think of a book. Sixty seconds later you can be reading it.’ Possibly, but there’s another step in between. You have to hand over some money.

Instead of getting annoyed by this separation between source and consumer (‘Think of a cow. An hour later you can be eating it.’) the advertising made me think of a much older campaign, for razors, which provides an excellent analogy for the contest between books and e-readers.

Despite what the techies would have us believe, this is not the same battle as CD’s vs Ipods, with only one winner. The nature of the exchange is different, simply because I can’t transfer the books on my shelf into the Kindle. I can’t read what I already own, or not electronically, without buying it again. I don’t think I want to do that.

So it’s not the same ring, not the same fight. The contest is more like Gillette vs Braun, and the ad I remember was shown on television probably in the early eighties. Three handsome young men are on holiday. For the purposes of the ad, there is a line of wash-basins outside on the beach. Exotic golden light reflects from bare (hairless) chests, and collectively the men decide that now is the time for a shave. All three of them rub their stubble, and exude a competitive smugness. They eye each other up.

The first man, wielding an expensive-looking electric razor with a cable, saunters towards the row of basins. Horror! There’s no electrical socket. HIs life crumbles around him; the other two smirk.

The second man approaches the row of basins wielding his shaving foam and trusty safety razor. He turns the tap. Double horror! There is no water! The gurgle of the empty pipes accompanies the ruin of his hopes.

The third man has a battery-operated electric razor. He doesn’t even approach the basins. He stays where he is and shaves, looking into the sunset, the alpha male forever after.

Here’s my point: Gillette did not collapse with the invention of the electric razor, even though it can be used on exotic foreign beaches where there’s no electricity or water. In fact, according to Marketing magazine, nine million of the UK’s 15.9 million wetshavers use Gillette. Despite the fact that a Braun is undoubtedly easier to use on a train.

The Braun has its moments, just as the Kindle will. But a razor still gives a better shave, just as a book gives a better read – it’s more reliable and the batteries don’t run out. The two formats can exist side-by-side. I own a razor AND a Braun. When the Kindle improves (I tried one before Christmas and the Fisher-Price buttons put me off) then I may well end up with one, possibly as a present that occasionally comes in useful when travelling.

But as far as analogies go, here’s the killer: Braun and Gillette are both owned by Procter and Gamble. P & G don’t care how you shave – they get your money either way. The same is true for the Amazon Kindle. And for writers.