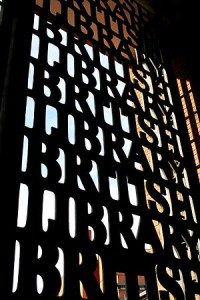 I’ve always understood that one of the key revolutions of the internet is to allow small but disparate voices to join together to make a louder noise than would otherwise be possible.

I like public libraries. This is a quiet like, but it is one shared by hundreds of thousands of people across the country. We will probably not be marching on Milbank anytime soon, but I’d like my quiet voice to be heard, and perhaps to join with other quiet voices elsewhere.

I spent Friday in the British Library at St Pancras, where I read some nineteenth century books about political arrangements in first-century Rome. Later, back at my computer, I received a circular email from the BL chief executive.

It was about the public sector spending review settlement, more commonly known as ‘the cuts’. After a 3% cut in 2010/11, the library has already made savings in the areas of acquisitions, preservation, and routine maintenance. The cuts now mean a further reduction in spending of 15% over four years, while the annual capital budget has been halved. This means that by 2014/15 the British Library will be funded at the lowest level since its creation in 1972.

This is Britain’s flagship library, a symbol of what we mean by civilisation. Our national library will acquire fewer books, will be less able to look after the documents it already has, and will skimp on door hinges and light-fittings and escalators that work. There will be ‘reductions in staffing numbers’.

If these cuts fail to have the desired effect on the wider economy, or if the banks need another bail-out, then the British Library is already projecting further measures such as closing the Library one or more days a week and charging for Reader Passes.

Instead of pointing out that more than 50% of the electorate voted against making these kind of drastic cuts, I think it’s worth asking George Osbourne or David Cameron when they last used a public library in earnest – borrowing a book, or slipping in to read the paper. Either answer is depressing. If so long ago that they can’t remember, then they know nothing of what the country stands to lose. If it was recently, then they know and don’t care.

I suspect, as I think we all suspect, that the answer is more likely to be the former than the latter. This is the Tory way. We could ask them when they last played tennis on a municipal court or attended a drop-in music session laid on by the local council – photo-ops for political advantage don’t count.

They think they know what they’re doing. They tell us they have no choice. And soon, when the libraries close, the people they claim to lead will be less likely to share what I learned in the library on Friday. The Romans, too, thought that with all their learning, their philosophy and poets and religions, that civilisation could never again go backwards. That’s what they said before a thousand years of the Dark Ages – we’ve come far enough, the world can’t go backwards now.