2. Mozart! Now There’s Someone Who Pisses Me Off!

From I’m No More of an Idiot Than Anyone Else. 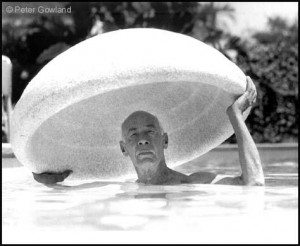 Henry Miller and his thinking cap

Mozart is perfection! I don’t want anything to do with either him or his.  Me, I like a bit of imperfection.  Down with Leonardo!  Down with Flaubert and all that gang!  Down with the eighteenth century – Voltaire, d’Alembert, Diderot and all those people!

Me, I like the monstrosities of Rabelais, Rimbaud, or Cendrars. A Hemingway doesn’t speak to me.  Even Bach bores me sometimes.  In general I like those people who are a little bit (or a lot) mad. The imbecile, no!  The idiot, yes!  There’s a big distinction between the two.  To be mad is to be a poet.  But it’s the imbeciles who rule the world. More worthwhile to have simple people in the legislature than the people we have today, rats, whores!  Imagine a world governed by a triumvirate like Chaplin, Satchmo and Picasso.  Even dead they can do better for us than the men in charge just now!

We’re not yet completely fucked, only nearly.  There will be worse to come than Hitler, Nixon and their like.  We’re waiting for the coming of the monsters, as in the time of the Romans – madmen, fools, megalomaniacs and the rest.  Ours are still babies.  Curiously, even the sense of cruelty has deteriorated.  Theatre of cruelty?  Not yet, my pretties.

I’ve never had much involvement in politics.  In my opinion, it’s impossible not to be corrupted in that particular game. They’re all tricksters, crooks, yes, toss-pots.  The same goes for religions.  Jesus, Buddha, Mohammed, they never changed anything.  Evil and good co-exist. This was Zarathustra’s big idea, but nobody accepts it as the truth.

Back where I come from religion, or preaching, can become a profitable business.  Look at Billy Graham and Katherine Kuhlman.  I guess there are the same kind of people where you come from.  They cover the world, like worms and rats.

The only thing we’re lacking is angels.  In this vast world there is no place for them.  Even if there were, do we have the eyes to see them for what they are?  Maybe we’re surrounded by angels without knowing it.

One thing is certain – we recognise the demons amongst us.  And they are legion!  Bitter though this fact may be, the devils are sometimes more interesting than virtuous people and hypocrites.  I’m speaking of ordinary demons, not a Gilles de Rais or a Hitler.