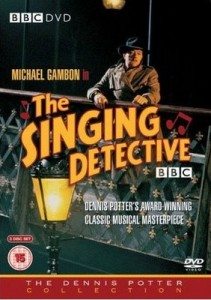 There was once a time when instructions coming out of the TV were worth trying to follow.  This was in the days before – ‘Who will leave the house?  You decide.’

I remember an episode of Dennis Potter’s The Singing Detective, in which Michael Gambon was red and flaking in a hospital bed with Potter’s unfictional psoriasis.  To cheer Gambon up, even though he was only acting, another character asks him for his favourite word in the English language.

Fortunately, there was a pause.  But not a very long one.

I liked this.  We were in the same area.  Both words had the same lament of an ending, and the middle curve of the l.  Potter’s word has a more pleasing symmetry, but the vowel sound that begins and ends the elbow makes my word come and go from nowhere, a little universe all its own.  I prefer my word, as a word, though willows are more beautiful than elbows.  Potter’s word relies too much on the thing it describes.

Some words are more seductive than others, and writers gradually pick out their favourites.  I’ve always liked the word Mogadon, but have never managed to use it, and my faith in the reader/writer relationship means that I believe a lot of readers will like Mogadon too, when I eventually fit it in.

These are Henry Miller’s favourite words in French, from J’suis pas plus con qu’un autre .

I have no idea what pudibonderie means, but I think I like it.