Football is an Optical Illusion 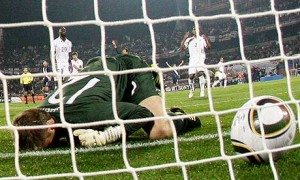 In South Africa there have been three major goalkeeping howlers after four days of matches.  England, Algeria and Paraguay have all seen their keepers bamboozled by what most people would think was a familiar sight to the man in goal: an approaching round object known as a ball.

Apparently the official 2010 World Cup ball, the ‘Jabulani’,  deviates unpredictably in the air.   Some have blamed the manufacture, others the effect of altitude at some of the South African stadiums.  A football is not a technologically tricksy idea.  There is only so much that can go wrong, and most people have rightly assumed that the complaining goalkeepers have other ‘issues’.  Like not being very good at keeping goal.

Or so I thought, until I looked at this picture in today’s Guardian.  This Jabulani ball does not look round.  It is round, and our eyes adjust to make it round like a football.  But look at it closely.  The illustrative design on the ball has created the optical illusion of a shape more like an egg.

This is a sensational discovery.  Eggs don’t have a centre, as a ball does.  If kicked, an egg would wobble.

When a goalkeeper is aiming to get his body behind the ball his eyes and instinct search for the centre of the ball as his target.  The ‘centre’ of the Jabulani may be unclear because of an optical illusion caused by the branded decoration on the ball itself.  This means that goalkeepers, especially under pressure, are more likely to misjudge the flight of the Jabulani and make mistakes.

This is the answer.  Someone should be told.