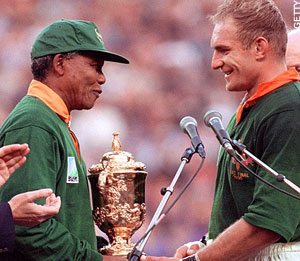 There’s an old rugby saying: if you’re good enough, you’re big enough.  The actor Matt Damon would have to be very good indeed.  In Clint Eastwood’s new film Invictus, Damon plays the role of 1995 Rugby World Cup winning captain Francois Pienaar.  He is 5 inches shorter and 4 stones lighter – the All Blacks would snap him in half.

At 5’10” Matt Damon is also shorter than Nelson Mandela (6’1”), who in Eastwood’s film is played by Morgan Freeman (6’2”).  Winning the World Cup as the shortest man in the room is the kind of exploit that Hollywood loves.

Invictus is based on John Carlin’s book Playing the Enemy, which describes Nelson Mandela’s use of rugby to seduce white South Africans to his vision of the Rainbow Nation.  ‘Don’t address their brains,’ he said at the time, ‘address their hearts.’  And deep in the Afrikaaner heart is a love of Rugby Union.

For a potential Oscar-winning Hollywood blockbuster, the obscurity of rugby   presents a problem.  What, exactly, is this strange-looking game? The bemused film critic of the Tucson Weekly described the Invictus sports action as ‘a bunch of guys groaning a lot,’ while over at the Kansas City Star rugby ‘pretty much looks like a group mugging.’

Over here, though, everything will be different.  We know what rugby is supposed to look like.

Unfortunately, I’ve seen Invictus and rugby doesn’t look like this.  As with any sporting setback, it’s not fair to place all the blame on the captain.  Matt Damon isn’t given much of a team.  His stand-in Springboks look like college boys, though not necessarily students of acting, and their emotional range is limited even for rugby players.  They sometimes cross their arms to express indignation.

These are pat-a-cake Springboks led by mini-Matt Damon and they will never win the Webb-Ellis Trophy.  In that sense, the casting is perfect for the formula – Nelson can lick the boys into shape. If they follow his crazy reconciling ways, then one day, perhaps at a World Cup on home soil, they will ultimately prevail. 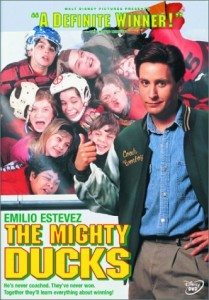 The Anxiety of Influence

Eastwood, too, is in the business of addressing hearts and not brains.  Mandela is a complicated man in a troublesome country, but as with the rugby it’s easier to keep things simple.  The Mandela bio-pic soon becomes a plot-standard sports movie: he’s black, he’s from the wrong side of the tracks, but can kindly ex-con Nelson Mandela inspire a bunch of undersized students to become Rugby Champions of the World?

Maybe he can, if these actor Boks show they know their rugby.  I certainly hadn’t written them off in advance, especially as in America Invictus was rated PG 13, for ‘brutal sport action’.

Which is exactly what rugby should provide, when played properly.  By ‘properly’, I mean as we’re used to seeing it on TV, most of the weeks of the year.  To capture the full dynamism and grace of the game, and also the brutality, TV sticks to the basics.  High-spec cameras follow the action.

In Invictus, because the players aren’t a patch on the real thing, the camera does exactly the opposite.  It obscures the action.  Eastwood keeps cutting away, and no single sporting sequence is allowed to develop.

I can see just enough to make out that Springbok fly-half Joel Stransky is having a bad day with the boot.  He can’t punt a rugby ball, and his incompetence is so striking (in a Test Match, Brian!) that I want to see immediate replays of his flawed technique.

That’s my Pavlovian TV-spectator response to unusual sports phenomena, a category that includes all the rugby in this film.  I want Eddie Butler to explain why the wingers don’t sprint and the Samoans are weak in defence.  Is it the altitude?  Have the All Blacks been poisoned?  And why has Andrew Mehrtens appeared in a World Cup final wearing an Andrew Mehrtens wig?

Instead of this sense of involvement, I gradually realise I’m watching the one activity on earth that is as far from real life as it’s possible to get: the rugby looks like amateur dramatics.

And in Invictus there’s no escape, because the ‘95 Final is shown at length, almost thirty minutes of ersatz rugby action. The fearsome Jonah Lomu is replaced by a slightly chubby student.  He is occasionally jumped on by other students, but before we can assess his contact skills the camera cuts to another unrelated set-up.  There are scuffed kick-offs and elementary back-moves, all performed at rehearsal pace so as not to confuse Wisconsin.

Eastwood knows something is wrong.  How could entire nations be in thrall to this?  He therefore decides that the fervour of rugby is best expressed by sound-effects. 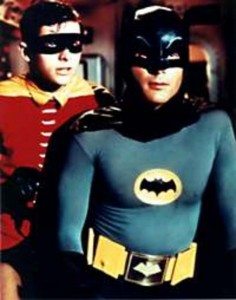 In Invictus, the major injury risk to the players is earache.  Every tackle boofs like a blunt object thumped into stuffed leather, and out comes the stuffing as grunts and oomphs.  This is the aural equivalent of the Batman biff and boom.

Just when the rugby can’t get any worse, the match goes slow-mo.  On television, slow-motion exists to repeat the interesting bits.  In feature films, it means the emotional heft is so weighty that time stands still.  Or feels like it does.

As the action slows, so does the sound.  Ellis Park fills with whale-song, as the groans wallow deeply from one amateur tackle to the next.  The Springbok fly-half Joel Stransky, who isn’t Stransky and who has forgotten his kicking boots, is calling for the ball in slow-audio, an unintelligible last word direct from a Hollywood battlefield, possibly Iwo Jima, and I expect him at any moment to receive (tragically) a solitary bullet between the eyes.

Instead he pops over a drop goal.

Clint gives rugby the fatal Hollywood treatment.  In doing so, he undermines his film about Nelson Mandela, the nature of leadership, and the new South Africa.

In the best Hollywood sports films, usually about baseball or boxing, the protagonists are allowed to be grown men.  Their lives depend upon their sport.  The 1995 Springboks were also men, much closer to the flawed and grizzled heroes of Eastwood’s earlier work than they are to the college-boys of Invictus.  They were playing for their old life and their new life, and also for themselves.

It does the truth of the story a disservice to insist, less than fifteen years after the event, that Mandela and the Boks can be simplified to serve the narrative conventions of this film.  The rugby is central to this weakness.  It becomes apparent long before the end that the epiphany of Invictus depends on the Springboks winning the Cup.

South Africa win.  The film ends, and as choral arrangements squeeze the last sentimental tear from any dry eye, the credits roll against a montage of still photographs from the final.  The real one.

There is a photograph of Nelson Mandela, the great man himself, at Ellis Park before kick-off.  He is famously wearing the No.6 Springbok jersey, in green-and-gold, and he looks tiny against the blonde Afrikaaner bulk of Pienaar, the man he called ‘captain of rugby’.  Anyone genuinely inspired by Nelson Mandela, and indeed by the game of rugby itself, will know that the triumph would have been as great if South Africa had lost.