How To Build An Igloo 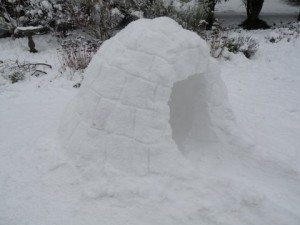 I could live in this forever

Then you will need three small children.  Close their school for the day, and find an expanse of snow-covered ground.  Be the first there, because that makes it more fun.

Okay, I can’t do the instruction thing any longer, because it hurts.  But this works best if you don’t have dogs – with dogs, you can never quite scoop up snow with abandon.  However, you can be sure that some of your whites will go yellow.  I recommend, before building an igloo, that you put down the dog.  Igloos are a significant challenge.  Respect the igloo.

As with all building projects, appoint a foreman.  For best results select a woman, because it cuts out the arguing.  Preferably a strong energetic woman from a country where the knowledge of how to build igloos is passed from generation to generation.  Iceland and Greenland would be first choice, followed by the Scandinavian countries, though Switzerland will do at a pinch, and also possibly Southern Germany, the French Alps, and some regions of Italy and Austria.

Listen carefully to your foreman, then do what she says.  Send the small children to collect huge amounts of snow.  They will understand, especially if you can find a whelbarrow with a flat tire and an old broken bucket.  One of the secrets is to think ‘cone’ and not ‘dome’, at least in the early stages.  Another secret is to pack the snow in hard.  This is an edifice, not a toy. 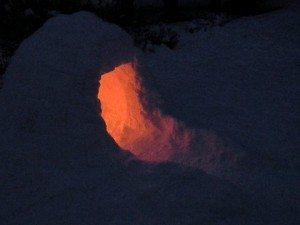 I can’t tell you any other secrets, because then I’d owe my soul to Smilla, Inuit Goddess of Feeling.  However, I feel able to reveal that a wood-saw helps with the final stages, and also a frisbee or similar instrument.

Ah, now that’s a way to spend the day.  School’s out again tomorrow.  We’re going to build an ice hotel.