The Problem with Public Art 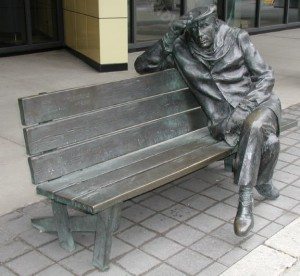 Dru tells me, with all due respect, that I haven’t yet developed my blogger’s voice.  She means that I write like I always write.  I haven’t managed that intimate but off-beat tone that she does so well herself.  But then Dru has unfair advantages as a blogger.  She does loads of stuff.  She’s been having an adventure-a-day, against doctor’s orders, since before blogs were first used as solid fuel.  Take a look.  This is how it should be done.

Instead of adventures, I make a habit of sitting at my desk doing nothing much, though I do have an idea for an art installation that will be a speeded-up film of my day at work.  The lucky audience will get to see exactly how often I drop my head into my hands.  It will be fascinating.

Meanwhile, and in the absence of shipwrecks and poetry readings, there’s Dru on a walk through Leigh Woods stumbling across ‘a stone. It’s Welsh slate, carved with the words AND STONES MOVED SILENTLY ACROSS THE WORLD. It was put there by Alyson Hallet.’

This stone serves the perfect function of public art, in that it’s not very noticeable or thoughtful.  Public art needs to be inconspicuous.  It gets installed in public places.  If the passing-by audience become animated in any meaningful way then the council fears a traffic hazard or an incitement to vandalism.  Public art is therefore chosen for being whatever art isn’t  -passers-by must pass it by.

Fountains are the second-lowest point for public art  – they often get turned off, as if they were never there.  The highest contempt, however, should be reserved for public sculptures of human figures on town-centre benches.  They’re rubbish art.  But they’re also taking up a space on a public bench.  What good to the public is that?