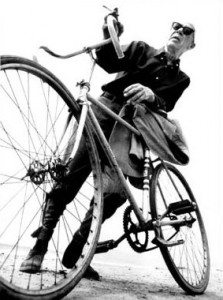 For some time I’ve been gearing up to translate a short and little-known book by Henry Miller called I’m no More of an Idiot than Anybody Else.  Maybe.  Despite the fact that Henry Miller is American, and wrote in English, he made an exception for Je Ne Suis Pas Plus Con Qu’un Autre.

There in the title lies the first dilemma.  ‘Con’ is perhaps the most common French curse word.  Certainly, it is a word that most Anglophones will hear at some stage on any visit to France, often prefaced with ‘espece de’.  However, your French antagonist may be calling you something more or less rude than you think – the exact equivalent in English is unclear.  Strictly speaking, a con is a cunt, but this translation is far too extreme in English.  The French aren’t that rude, or not on an everyday basis.  Yet ‘Idiot’ isn’t quite right.  The Irish ‘eejit’ might come closer, except for its spectacular and confusing Irishness.

When in doubt,ask an expert.  I therefore put the question to my French translator Marie Rennard, who as well as doing a fantastic job on Dry Bones and Le Rugbyman Nomade, also writes an extraordinary blog, Melting Pot et vin blanc.

‘any adjective preceding (or following) “con” in french will induce a different connotation, opening on a wide range of translations, “brave con” being far more indulgent than “indécrottable con” or “vieux con” or “sale con”.

Translations could vary from a light “idiot” to much worse, all depending on the context. It comes from the latin cunus (vulve, or lapin – but I don’t know why – still, lapin lovers are  called “cuniculophiles”, which etymologically could also refer to con lovers).

Con acquired its vulgar connotation in the 12th century, and became an insult during the 19th.  its original meaning of female genitalia is today completely forgotten, except among people who enjoy old books. Still, if the adjective used with the word can strengthen or weaken its meaning, it is important to note that who says it can also modify its strength. Remember Sarkozy’s “casse toi pauvre con”, which was perceived as much more injurious in his mouth than in any other.’

Ladies of the Night

It’s important to get these things right.  The worst case of misunderstanding I came across was in the Guardian, in a profile of the French novelist Michel Houellebecq. The interviewer expected him to be a foul-mouthed misogynist, and gleefully described how half-way through the interview Houellebecq answered the phone and repeatedly called his wife a whore.

I had a think about that. ‘Putain’ he must have been saying, ‘Putain.’  Anyone with a taste for colloquial French knows that this is close to ‘Fucking Hell’ or ‘Shit’, registering a standard-type amazement when listening to a story told by another.  Houellebecq was not calling his wife a whore.

Nor, for that matter, do  French school-children go around shouting ‘Drawing Pin!’ whenever they’re annoyed.  They do shout ‘Punaise!, often and loudly in every schoolyard in the land, and Punaise does mean Drawing Pin.  But what they’re actually saying is ‘Putain!’, in a way that won’t upset the teachers.