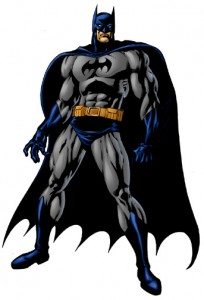 I was reminded about this because I was thinking about the translator Marie Rennard, who came up with the title Le Rugbyman Nomade. In French, ‘le rugbyman’ is a commonly used term for those lucky souls with a passion for the sport of rugby. However, it means more than that, just as ‘le cricketman’ would be someone with more than a casual interest in cricket. ‘Le rugbyman’ is a rugby nutter. He’s mental about rugby. This is because the ‘man’ in ‘le rugbyman’ comes from the wide-eyed man in maniac.

I’ve always liked this false-friend aspect of ‘Le Rugbyman’, as if everyone who plays rugby is indeed a superhero, with a big R in a shield across the front of his stripey jersey. Bird, Plane, Rugbyman – Dru could draw this in her sleep.

Knowing that the man comes from the maniac has wider consequences when the French meet our English-language superheroes. I mean the real ones.

Spiderman, pronounced Speederrhhman, is a confused newspaper reporter who is mental about spiders. Superman is a general, all-round, 24-hour basket-case – Supermaniac. He is the maniac above all others. Either that, or he just loves everything that’s super. He’s the original Hero of Super, a Superhero.

Batman gets a double misunderstanding, but barely suffers (he’s superhuman) in translation. Small French boys love Batman, but not because he has a friend called Robin or was bitten by a bat as a child. They’re immediate fans because here they have a superhero, just like them, who loves to ‘battre’. He’s Batman, a maniac about fighting, which about sums him up.

Language. What a Marvel.