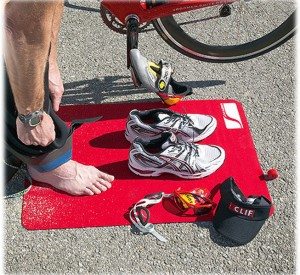 Saturday afternoon, and it’s the Hyde Park World Championship Series Triathlon on BBC 1.  This is the sport you get on terrestrial for £142.50 a year.  It went on for hours.  And hours.

In principle triathlon should be interesting to watch.  Superfit athletes, male and female, cutting straight through the monotony of single-issue athletics by combining three events in one.  It’s probably quite interesting to do, making sure there are no muscles that don’t hurt by the end of the day and riding a bicycle 40 kilometres in a swimsuit.

The problem with triathlon as a spectator event is that the first two disciplines – swimming and cycling – don’t obviously influence the end result.  They last for over an hour, two races that are irrelevant to the real race, which is decided in the final 10,000 metre run.

Neither the swimming nor the bicycling are boring in themselves, but triathlon makes them so.  The Tour de France is fascinating because there’s a purity to watching the best cyclists on earth excel at what they do best.  The same is true of Olympic 10 kilometre swimming.  The triathletes are not the world’s best swimmers or cyclists, and neither the 1500 metre swim nor the 40 km bike ride is long enough for a narrative to develop.  The contenders stick together.  That’s all they have time to do.

There’s the endurance, which is worth admiring.  I also admire the endurance of Chinese agricultural workers, but I don’t want to watch them for 210 minutes on a Saturday afternoon on BBC 1.

So the contest boils down to a 10,000-metre road race in which the athletes start off very tired.  They could skip, or saw logs.  It would be just as interesting and have the same effect.

It doesn’t help triathlon’s cause that the BBC are discovering the sport as the same time as the audience.  About half way through the swimming I could hear mouths dry as the commentary team realized there wasn’t much to say, and then half-way through the cycling when the awful truth dawned that this might be boring all the way through.

The commentator handbook has strict instructions for this eventuality: compensate by saying how exciting everything is.  At one point the rictus presenter Graham Bell dreamed fondly of a ‘really, really exciting climax.’  Dream on, Graham.  The veteran BBC commentator Stuart Storey moved from dreams to feelings – ‘I have a feeling the end will be quite interesting.’

It didn’t help that the commentary and camera teams seemed unconnected.  ‘Is that the Swede?  We’ll have a look when we can,’ or that the cameras missed the occasional interesting moment, like the Spanish favourite falling off his bicycle, or a man breaking his foot in transition by getting his toes stuck between his spokes.

Oh yes, the transition.  I know some people who’ve done that, but not in triathlon, and I’m prepared to bet that the transgender transition is more interesting to watch than damp athletes changing their shoes.

This essentially is the problem.  If neither the swimming nor the cycling can help find a winner, then top level Triathlon becomes a contest in how fast you can change your shoes.  Competitive slip-ons, live on BBC 1.