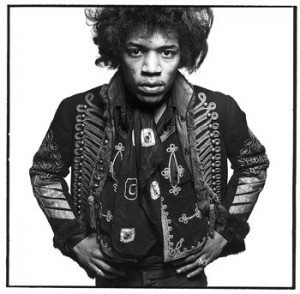 'no, seriously dude, where are my ear-goggles?'

On a bootleg Jimi Hendrix album called Mr Pitiful (German sleeve, Swiss pressing) Jimi has a shambolic stab at a studio recording of Wooly Bully.  He is long gone dogbone stoned, and has lost his earphones.  He finds this hilarious, but nobody else knows what he’s looking for.  You know, he giggles, the ear-things, man, the ear-goggles.

I always loved that.  And since i-pods came out even more so.  Tuck in the plastic ear-goggles and see the world differently, in your own chosen way.   My music, my timing, my world.  I-pod, me-pod.

The i-pod is a wonderful invention, but I can’t help feeling there are some unanswered design questions.  I don’t use my ipod on the bus, not since I was made jumpy by the full tincan trash of overheard Gangsta Crap Classics on the 994 bus to Perry Barr.   I started to wonder whether i-pod earphones, at high impact, would do more damage to my knuckles or to a person’s inner ear.

I thought probably the latter, and he wouldn’t even hear me coming.

That’s why I stopped listening to my ipod in public.  There are nutters about. Many of them get enraged by the tin-tinny sound, and it’s not your music, your timing, your world.  It’s theirs as well, it’s mine, so be careful out there.  The world is bigger than your i-pod can make you think.

If i-pods are such a great invention (and they are) and Apple is such a great company (and it is) why can’t they make earphones which don’t spill so much sound in the wrong direction?  I’d like to take that question seriously.  I’d like to go and talk to someone at Apple about it.  Who made the decision that the earphones could be rubbish?  Who’s working at sorting it out?  If I can get someone to pay me to ask the questions I might well go ahead.

In the meantime, the tunnel ear-vision of the i-pod reminds me of a song by those old phonies The Levellers.  I always thought the lyrics went:  ‘There’s only one wavelength, and that’s your own (that’s your own, that’s your own).’  I could never understand that: the Levellers were supposed to be neo-anarchists but they were writing lyrics for Herman Goering.

I just looked it up .  The song is called One Way, and the lyrics go ‘There’s Only One Way of Life, and that’s your own (that’s your own, that’s your own)’.  Even worse!  Plugging in the i-pod can be like this, tone-deaf and goggle-blind to the desolation of the ‘only me ‘ idea.  My music, my world.

Still, those me-pod moments appeal to the apocalyptic teenage egoism that hangs around in all of us.  The same self-absorption that can make the teenage years so lonely.  Truly, no-one else exists.  The full surround-sound blindness.