Done in by a Chiltern 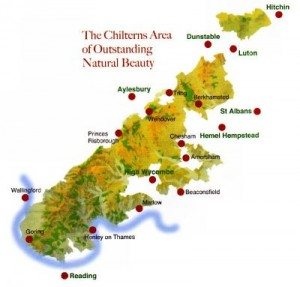 I’m trying to find out about the new place I’ve come to live.  One way is to walk about.  I’ve done a bit of that.  There’s also jogging.  I’m now a familiar sight along the Thames, tripping over mooring lines and dodging courting couples.  Courting doesn’t involve much talking these days, it seems, and you can do most of it with your eyes shut.  The Thames on a summer evening is the longest Lover’s Lane in England, with boys and girls in their late teenage taking another last chance to grow older without regrets.

For the broader view, I’ve also taken to my bike, and yesterday I rode from Slough to Oxford.  Somewhere outside Henley I took a detour into the Chilterns, and learnt an important lesson: stone-age English folk knew what they were talking about when they named their villages.

Last October, with Virtual Tom, I cycled up a Tour de France Category 1 climb in the Vosges, the Ballon d’Alsace.  It was so much fun we did it twice in a day, and Tom’s typically concise account can be found here.  Riding a bicycle up a proper mountain is a very relaxing experience.  There’s no rush.  You physically can’t go any faster than you’re going.  And you can’t go any slower because at 8 kph the bicyle topples over and you fall off.  Nothing else for it but to settle in, and enjoy the views for the next ten upward kilometres.

There’s no such philosophy to save the unwary bike rider in the Chilterns.  It’s the Chilterns, I kept thinking, I can go faster than this.  I’m heading for a place called Pishill, I told myself, which is a pissy little hill outside Henley.

Only it isn’t.  It keeps on going, and going, not steep, but by now I’m completely cooked from failing to notice that I’ve been going uphill for some considerable distance.  While I thought I was pushing on, the Chiltern hills have gradually been stealing away my soul.

I should have learnt my lesson years ago, at a place called High Ham near Glastonbury.  That High isn’t there for fun, and especially not on a bicycle.

Towards the end of the trip, I saw two small boys waving from the entrance to a Garden Centre.  I pulled across the road to ask them if they needed any help.

I’m the competitive sort.  We entered into an interesting discussion, and eventually decided that a cyclist pulling over and stopping was worth ten whole points.  It was the bomb that decided the game.

It was only as I was riding away that I realised this game can only be fun to play in a part of the country that is essentially unfriendly.   Who wouldn’t wave back?  Then I remembered.  I’m in the Home Counties, or near enough.