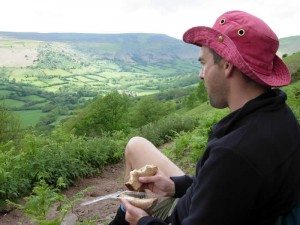 From personal experience, I will now pass on some essential advice about what to do when your motorcycling, canoeing, hiking and generally manly man friend tells you he’s about to have a sex-change.

That’s it. Failing this, you must not under any circumstances go on to say what you’re actually thinking, which in my case was something like this:

You ride a motorcycle called The Flying Pig and are an expert on remedies for shaving rash. You have a dismantled crank-case on the table in your front room. You drink lunchtime pints of Smiles Old Tosser and you work in the engine-room of a 7000 ton ferry. You are not a woman.

She was wearing her usual outfit of black combat trousers and a ragged fleece, but also pearl earrings and a brushed-down fringe. She’d waxed her forearms. I had an awful, immediate sense of no going back, followed just as quickly by an attack of paranoia. If this was funny (and it was second nature with male friends to search for the joke, the protection) it was a boyish prank being played at my expense.

Men pretending to be women are funny. They’re having a laugh, an old favourite from the dressing-up chest at the back of the British music-hall. But how funny is it to be a woman trapped in a man’s body? Is it alright to have a sense of humour about this? What exactly is the joke when Bugs Bunny dresses as a lady?

Sitting in her flat, that first day when some unknown force had doodled pearl-stud earrings onto the person I thought I knew, I found everything she told me questionable.

When did this start? How? Why? The predictable, loaded enquiry about sex – are you now or have you ever been attracted to men? (To me – that’s who I had in mind.) It was hard to avoid a nasty tone of inquisition, because the information she offered seemed unreliable. We knew each other pretty well, well enough to share on a regular basis the one-and-a-half man space in your average two-man tent, and want to do it again. That well, and not at all. If she could hide the truth that she was secretly a woman, then why believe anything else she said?

I went to the library and read some books. They didn’t always help. The medical information had me squeezing my legs together while the personal accounts were mostly witness autobiographies by Americans. America loves the transgender story (‘As Seen On Oprah!’) because it has obvious themes of transformation and re-invention, liberating a you-go-girl inner being just bursting to get out there and shake it.

The story is given a recognisable shape, a Hollywood heart-warmer with the bonus feature of sprightly details involving the wonder of vaginal dilators. The protagonist starts out as redneck Bubba and ends up a torch singer in a velvet lounge-bar. If she’s lucky. If not, she’s the strap-line on an afternoon victim show – My Wife Is A Man!

I wasn’t convinced that this model offered a true reflection of the here and now for this friend of mine in England, how it had started, how it was going to end up.

My friend switched her combat trousers for a denim skirt, with a Gerber multi-tool on a red lanyard clipped to the belt loop. It was a day or two later, and I was back at her place making a second attempt at an acceptable first reaction.

Some of her explanations sounded learnt, memorised from the FAQ page of a minority-interest website. She admitted that to get female hormones on prescription, she’d had to jump through hoops for a psychiatrist at the Gender Identity Clinic at Charing Cross Hospital in London. She even talked about ‘putting a name to my gender issues’, a sure sign she’d been exposed to language a psychiatrist might like to hear. It didn’t sound like something she’d normally say. But then the denim skirt didn’t look like something she’d normally wear.

It had started, so she said, one New Year’s Eve when she was given shore-leave from the her ship, which was berthed in Weymouth for the holidays. Her girlfriend travelled down from Bristol, and before hitting the town’s party-pubs the two of them decided to swap clothes.

‘Alas, no. My Doc Martens. Size ten women’s pumps are hard to find in Weymouth on New Year’s Eve.’

‘And in fact at any other time.’

Footwear apart it was a more than fair swap against a standard issue boiler-suit, but had the change really started so late? What the hell did I know?

Only what I’d read in books, so the second time round at her flat I resolved to keep my mouth shut and avoid the more bone-headed questions.

‘Why skirts and dresses?’ I couldn’t help it. ‘Why can’t transsexuals wear trousers? Women do.’

That was the fault of the system, apparently. The internet support-groups let it be known that anyone turning up at Charing Cross in trousers could be marked down for showing insufficient commitment.

‘To what? Marie-Claire and side-salads?’

Christ, I thought, you only put the earrings in a week ago.

‘And by the way,’ she corrected me, ‘transsexual is an adjective.’

At the same time, my friend seemed strangely unchanged. There were the clothes and the jewellery and the make-up, but these were on the surface. Underneath, and not that deeply either, the old Drew was visible, and however many questions I asked, I soon realised they were all foothills to the one central mountain of a question:

I wanted to be loyal, to be understanding and accepting, but the main obstacle was the possibility that appearances aside this new incarnation was simply not true. It was a charade, a deception, a jape. It was Bugs Bunny, and no-one wants to be fuddled and duped by the cheeky wabbit.

Did I believe in my friend as a woman? I didn’t want to hurt her feelings, but this was the same woman who knew the flight patterns of RAF Tornados, who thought that fewer than three pints at lunchtime didn’t count as lunch, and who cleaned out carburettors with a toothbrush. She just didn’t seem like the kind of person with whom nature had made a mistake.

When we’d first met years before I’d liked her immediately. Here was a real man with a motorbike and a real man’s job, in the engine room of the Channel Island ferry. That was her appearance and I was happy to accept it. She was a manual worker, a member of the working class! I was slightly in awe. She also liked her drink, as I did, as well as books and camping. She was so straightforward.

I can see now that this must have been a bad time, and the drink was a factor. I wonder what else I should have seen, but taking her as I found her, I wasn’t looking for anything else. I may even have believed that with friends it was bad form to look any further, with a view to making a judgement, and maybe that’s how I missed her churning desire to appear to the world as she really was.

It felt like a failure in our friendship, and I think there was a sense of disappointment on both sides. She let me down because she never told me. I let her down because I never guessed. I’m a writer. I’m supposed to be sensitive to such things.

I go over it again and again. Were there any clues, any feminine traits that could have alerted me? I remembered a blameless life of cheery self-reliance and outdoor pursuits, but suddenly she was taking to the streets of Bristol in a dress, and had no idea what she was doing – she went out looking like a transsexual. I remember one particular outfit: black stack-heeled zip-up boots, a sleeveless brown corduroy dress, ash-blonde wig. The full Oxfam rig, and although I had no intrinsic objection to any of these bits and pieces, I didn’t want to see any of them on Drew.

She took jolting doses of female hormone and changed her name by statutory declaration from Drew to Drusilla, while still working on a P & O ferry, the ear defenders infecting her newly pierced ears. I made a big effort to say ‘she’, not always successfully. I had, and occasionally still do have, severe outbreaks of pronoun anxiety, because ‘he’ and ‘she’ now carried more weight than pronouns felt designed to bear. They were the keys to an elaborate and disturbing deception, elaborate because it involved so many of us pretending that Dru was she, and disturbing because the lie was possibly the truth.

That’s what I ultimately wanted to find out – if ‘Drusilla’ was true. Luckily for me, when I suggested the idea of a book, she seemed keen on sharing the story of her life, ‘except if I die in surgery, obviously.’

I wanted to be fair. That’s what friends are for, and the stakes were very high. If ‘Drusilla’ was not true, then instead of a good person to go camping with my former friend was a real life horror story, a fizzing combination of modern afflictions. She was probably psychotic, possibly sexually deviant, certainly attention-seeking, and conceivably a secret special agent of the patriarchy. No wonder candidates for surgery have to see so many psychiatrists.

But that comes later in the story. For now, I’m supposed to be offering advice to Arena readers on what to do if you ever find yourself in a similar situation. So far you already know not to laugh and not to say what you’re thinking. You should also avoid the kind questions that come from nowhere to fill embarrassing silences, like ‘is it catching?’ and ‘I suppose camping’s out of the question, then?’

Dru gave me a withering look. Of course camping wasn’t out of the question, and nor was going to the pub. She was a woman, not a blushing wallflower.

Becoming Drusilla is the book that came out of a two-week walking and camping trip we made to Wales a few months after Dru’s operation. It’s also the biographical story of how Drew became Drusilla. I had to confront prejudices I didn’t know I had, often in public places, while Dru tried to convince me she was the same person and a woman. Try that today on one of your closest friends, if you think you know each other well enough.