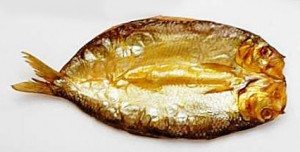 Before you leave, everyone will tell you how poor the food is in England.  This isn’t entirely true.  If you know how to time your hunger, you’ll be able to eat perfectly well.  In England there are two excellent meals: breakfast and tea.  Reserve your appetite for these meals only.

Learn to appreciate new pleasures: porridge, kippers, marmelade.  At lunch-time, fill yourself up with a big piece of rare beef or some admirably pink ham.  Refuse desert, in as manly a way as possible.  Say firmly:

In England, every other shop is a sweet shop, but even so the English have no idea what to do with sugar.  Leave the desserts to the women and children.

Adopt a taste for the national drinks.  They’ll tell you that whisky is a ‘clean drink’.  And so it is: it clarifies the spirit, sharpens the tongue and reheats the body.  The beers are good, but be careful to drink them like you drink our northern beers.  During the war, melancholy Tommies used to tell me:

‘We can’t get drunk on French beer!’

Never forget that a Frenchman can get drunk only too easily on English beer.

Train yourself to drink a glass of sherry before dinner, port after dinner, and whisky at eleven o’clock at night.  You will not impress if you drink only water.

Disraeli, in discussions with Bismarck, forced himself to smoke even though it made him feel sick.

‘In that kind of situation,’ he said, ‘the man who doesn’t smoke looks like he’s judging the other.’

You’ll get a taste for it, and anyway, their very dry port is better than ours.