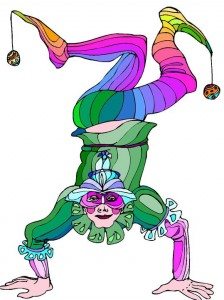 'everyone was dressed quite normally'

I’ll give you an example.  There was once a young Englishman who was invited to a fancy-dress ball at his neighbour’s in the country.  He decided to disguise himself as an Elizabethan jester.  He ordered a satin jacket, half-red and half-green, and short culottes with one green leg and one red.  He wore a two-toned pointed hat.

On the evening of the ball, he had himself driven to his friends’ house, but before he went in he sent his driver away.  He was a little surprised that the house was neither open nor lit up.  He rang the bell.

A butler opened the door, looked at him, and said nothing.  He showed the visitor, who he knew well, into the library where the host family were reading, playing chess, relaxing.  They were dressed quite normally.  There was no visible sign of a party.

Everyone stood up to greet their visitor.  Nobody seemed to notice his strange garb and a conversation started up, so naturally and pleasantly that the incomer himself soon forgot that he was dressed in a green and red body-stocking.

Towards midnight, the mistress of the house said:

– I know that you sent your car away; perhaps you’d like to stay the night?   My son, who is your size, will lend you some pyjamas.

No sooner said than done.  The next morning the visitor, still dressed in red satin, took his leave.  His host accompanied him to the car.  There he leant towards him and said softly,

– Good bye…We’re delighted to have seen you, but don’t forget to come back next week, when we’re having a fancy-dress ball.

You might think it would have been easier to say something, explain the mistake, laugh it off.  Personally, I find it charming that a group of human beings are able, in quite surprising circumstances, to remain straight-faced and talk for several hours with a fool.  Without once reminding him of his folly.