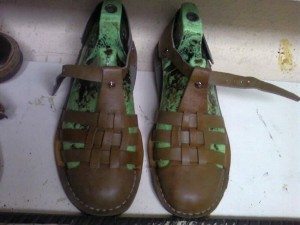 In the search for enlightenment, a pilgrimage is the opposite of a retreat. The pilgrim keeps moving, usually on foot, the better to learn from people and places along the way. Hiking has a similar appeal, and most walking enthusiasts would subscribe to St Augustine’s simple faith in the trek – ambulando solvitur – ‘As you walk, all is resolved’.

Except, possibly, in the Holy Land itself.

St George’s College, Jerusalem, is piloting a new one-week course called Hike the Holy Land, which aims to give visitors short on time a taste of pilgrimage. Eight of us have signed up, in an age range from 34 to 73, a cheerful group of English-speaking people lured by the promise of three contrasting types of invigoration: physical, intellectual, and spiritual.

Or on less buoyant days, three different reasons to worry. Not many holidays come with an accompanying bibliography, but anyone who skips the reading can relax.

Henry will take care of the knowledge. This is no ordinary guided tour, and Dr Henry Ralph Carse is no ordinary guide. Originally from Vermont, he modestly calls himself a ‘practical theologian’, which in his case is a synonym for charming polymath gone native. He can recommend W.H.Auden’s ‘In Praise of Limestone’ (‘examine this region of short distances and definite places’), demonstrate the secret spite of the caper bush, and explain the socio-economic consequences of a cotton crop on the banks of the River Jordan.

So no need to worry about not knowing enough. Henry will be with us every step of the way.

Physically, the course requires participants to be ‘in good physical and emotional condition’. There will be dawn starts and evening rambles, and a night beneath the stars.

Given the inherently optimistic nature of pilgrimage, I’d anticipated that the Anglican College would tread softly over local difficulties, out of respect for the dreams of their people.

To its credit, the College does not tread softly. On an early hike we walk from prosperous West Jerusalem to the Occupied Palestinian Territory of Bethlehem. The Bethlehem Road is the beaten path of the Old Testament prophets. It is also a suburban thoroughfare, where hairdressers and kosher steakhouses give way to car dealerships and furniture outlets. Our small band of pilgrims crosses to the Hebron Road via a petrol-station forecourt. The highway expands to six lanes, and cribbed images of nativity scenes shrink inside their bubble-wrap.

Contemporary Bethlehem is marked not by a star, but by the eight-metre high concrete-slab Separation Wall, encircling the city like a noose. This is one reason to walk, because travelling on foot resists the edit of coaches and chilled hotels. We process through the army checkpoint, join the bauble and scrum at the Church of the Nativity, but then detour to the Aida refugee camp, where the bullet holes in the metal school-gates are at a precise angle to the wall and its heavily-fortified watchtower.

The Holy Land is not a politically recognised territory – it has no contemporary frontiers, no sitting government. This means that on a more standard map our hiking involves areas in Israel, the Occupied Palestinian Territories, and to the north into Israeli-occupied Syria – a series of challenges to that cosy inner landscape where bible stories can make themselves a home.

At least in my case. Jerusalem itself delivers a thrilling shock of the old, the massive stones of Herod’s Second Temple waiting out whatever era this one turns out to be. Not that the past ever becomes a refuge, not on this course. After exploring the Old City we stroll through Jerusalem’s sparkling Mamila shopping mall. We’re here to see what there is to be seen.

This includes both birth-places of Mary, and two Mounts of the Transfiguration. The more impressive of the two is Mount Hermon, in a strip of land between Syria and Lebanon, a plausibly unforgiving spot for Jesus to have discovered his divinity. From there we walk south to the ruins of Caesarea Phillipi and the source of the Jordan River, and on the warm brown soil of the downhill path the limestone boulders are the size of loaves of bread. They appear to have fallen from the sky.

Mount Tabor is smaller but steeper, a neatly domed hill with views over the plains towards Nazareth. It is a rewarding grunt to the top, over old agricultural terraces and through stands of ancient olives. My personal uphill favourite was Mount Arbel, which used to guard the Via Maris, the main trade route to Lake Galilee and beyond. We explore the limestone caves where Hasmonean bandits were routed by the ingenious Herod: he lowered cages of soldiers from the cliff-edges above, and pulled his enemies to their death with long barbed pikes.

The geography informs the history, and here history is inseparable from theology. This usually makes for an intriguing hike, because those feet in ancient times did not walk on England’s green and pleasant land.

They walked here. This is the place. At the Jesus end of Lake Galilee, between Tiberias and Capernaum, we stop half-way down the Mount of Beatitudes. We sit beneath an olive tree on an area of corn flattened by earlier pilgrims, gaze over the lake and discuss how exactly the meek shall inherit the earth.

Gradually, we rediscover an elemental rhythm: walking, resting, telling stories. Pilgrims are pre-disposed to be friendly, and it is not unnatural to sing. As a group of strangers we’ve found each other out quicker, much quicker, than if we’d travelled sitting down. Each day starts with a prayer and twice we celebrate Eucharist on the road, by the shore of Lake Galilee and at the top of Mount Tabor. These services are short and moving. At the sign of the peace everyone has a reason to hug.

Although the hiking can be robust, we never walk beyond the talk, never once enter the blunt desultory state of trudge. The diversity of the topography over a small geographical area is astonishing. Our ears pop on a short bus transfer to the Dead Sea, the lowest point on earth, which in hiking terms means the only way is up. So we climb the abrupt edges of the Great Rift Valley, leave the path and clamber into the early morning wonder of Dodim’s Cave, where we swim in the clear waters tumbling from the Wadi David source. Beneath us ravens glide between outcrops of rock, and this is the dividend of a guided tour, done properly: we reach the best bits quickest, and when no-one else is there.

Like the sand dunes beside Herod’s Caesarea Maritima aqueduct, to cool off in the gentle waves of the biblical Great Sea. Or camping out on Mt Deborah, where we talk about death and watch the hard petals of pine-cones flare and glow in the fire. As evening becomes night a bright half-moon slips onto its back, and I lie awake for a long time looking up at the stars, for once with the time and inclination to wonder what they can all possibly mean.

This is a week that delivers on its promises, that much I know, and the spiritual invigoration comes refreshingly free of too many visits to churches. The Holy Land has no shortage of churches, each one like an upturned cup hoping to trap the meaning of events long past. Some manage more successfully than others, but it is the changing landscape beyond their doors that pilgrims cherish as an extra gospel – the best way to read it is with your feet.

St George’s College is in the grounds of the Anglican Cathedral in East Jerusalem, and the great Palestinian writer Edward Said was educated in the neighbouring St George’s School. The College was founded in the 1920’s for British and Palestinian priesthood candidates, but is now an international ecumenical centre for continuing education.

St George’s runs courses year round that are open to all, though the Rev Dr Stephen Need, Dean of the College, suggests that visitors should at least sympathise with or have an interest in religion and the Anglican Communion. Applications to the college are now recovering after the instabilities of the Second Intifada, but the Dean is confident that Jerusalem and the Holy Land remains a safe place to travel.

‘Tourists have never been a target in this area,’ he says. ‘It is safer here than in London. The issue here isn’t safety, it’s injustice.’

Courses are a hybrid mixture of field work, educational programme and pilgrimage. Prices start at £800 (for Hike the Holy Land), and are inclusive of everything except travel to and from Jerusalem. Thomsonfly are now offering low fare flights to Tel Aviv from Luton and Manchester from £89.99 one-way.