Sport at Pembroke College Cambridge since 1945: From Pembroke in our Time 2007 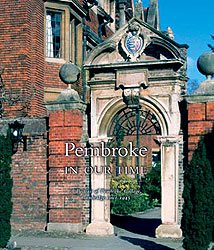 In the absence of James Campbell’s formidable memory, a view of College sport over the last sixty years becomes dependent on the club pages of the Pembroke Gazette. Fortunately, at least in its sports section, the little blue book can be made to yield to statistical analysis.

Since 1945 in all sports except rowing, as recorded in the Gazette, Pembroke has managed outright Championship or Cuppers wins on thirty occasions. I include the unbeaten cricket season of 1947, even though that year’s cricket team professed themselves ‘free from the anxieties of competitions.’ Nevertheless.

Over a sixty year period the maths couldn’t be easier: we have a habit of being the best in at least one University sport about every two years. A closer study of the Gazette, however, reveals a much more alarming fact. Pembroke has been runner-up, either second in the League or beaten finalist in Cuppers, an astonishing 54 times. I’m sorry to have to be the one to break this news, but when the pressure comes on, when the kitchen heats up, when the tough get going, we the sportier members of Pembroke College have a collective tendency to choke.

What well-rounded people we must be. Not for us the one-eyed focus on victory, but the peripheral vision that takes in doubt and self-destruction (and just in case boaties think they’re immune from this, in the Lents and Mays Pembroke has finished second-placed on the river 19 times since 1945, Head only 8). Sometimes, our casual attitude to conquest can defy belief, as at the end of the 1970 squash season: ‘We lost the Cuppers final to Selwyn by a walkover – surely the first time ever – after an unfortunate series of misunderstandings.’

Personally, I find our habit of coming second rather endearing, like Orwell’s model Englishman prepared to step off the pavement for any stranger to whom the pavement matters more. I particularly like the involved, complicated philosophy of the second XI football team of 1988, who ‘took great pleasure in beating teams who placed too great an emphasis on winning.’ Discuss.

Was there ever a Golden Age? From 1976 until 1978, Pembroke was dominant on the river, had a champion rugby team, was a top-flight contender in squash and an irresistible force both in the pool and on the croquet lawn. Again between 1983 and1986, coinciding with more success for the oarsmen, the rugby team won the league title twice, the hockey was strong and the cricket and tennis teams both contested Cuppers finals. Two separate Golden Ages, though both short-lived.

Otherwise, there isn’t one club that hasn’t been up and down through the divisions, nor any sport too often robbed of glory. Rivalries shift and change, but Pembroke teams most often suffer and fall at the hands of the ‘eventual winners’. The ‘eventual winners’ are always beating us at an unreasonably early stage of Cuppers, except in weaker seasons when we lose to the ‘eventual finalists’. In 1968, an otherwise promising year for hockey, our hopes were brought to an end by ‘last year’s winners’, as close to glory as that particular team could claim to come. It should be said that on the whole we take defeat well, often losing to the better team. There are, however, anguished exceptions, as with the Rugby Cuppers Final in 1974, when ‘the final score (27-13) was a tragic lie.’

If a specifically Pembroke set of characteristics reveals itself across all sports, it’s how defeat or limited success can always be redeemed by ‘spirit’ and ‘keenness’. There’s a noble tradition of self-sacrifice in times of difficulty, no more so than by poor overworked Reg Carnell in 1965, ‘who for much of the season was the only goalkeeper in College, and so had to play several games a week.’

The sports in the Gazette change with the times. There’s a core group of boats, rugby, soccer, hockey, cricket, tennis and squash, while other sports come and go depending on fashion and whether Pembroke can raise a plausible team. In the late 1940’s, for example, the Gazette has space for the highly successful Cruising Club, yachting champions in both 1945 and 1946 (and more in College character, runners-up in 1947). By 2006 there’s pool and volleyball and ultimate frisbee. In between times there are sporadic appearances for golf and fives, athletics, badminton, water polo, table tennis, chess, and some mostly solemn entries on croquet. 1977: ‘Croquet is now taken seriously in Pembroke and many other Colleges. Pembroke entered 12 teams for the Cuppers and were most successful.’

Whatever the sport, Pembroke teams encounter the same perennial problems. ‘The weather was not generally good’, there are injuries, the scientists have too many practicals. The College admissions policy is always a target for clubs in trouble, such as the 1980 soccer team who’ve ‘done their best to halt the decline of Pembroke’s football prowess, a decline caused by factors beyond the control of junior members of College.’ In 2002 there’s more dark talk about ‘the diminishing intake of athletes’, but those of us with a torch for Pembroke sport should keep a sense of perspective. Our passion can sometimes create unreasonable expectations, possibly betrayed by the hockey team of 1967 – ‘things looked promising with an encouraging number of freshmen, but it was an intake of defensive players and our requirement was for forwards.’ Admissions tutors! Whatever were you thinking?

Having said that, the fair-play Pembroke teams are consistently opposed to ‘imports’, something those redoubtable opponents the ‘eventual winners’ always seem to have.

Other recurring problems include players seduced from the games-field by ‘rival attractions’, which I always hope is a euphemism for requited passion, and therefore beyond reproach. In cricket, even in 1970, ‘the main problem is still to persuade people that eight hours cricket in a week is better for the constitution than eight hours revision.’ And then there’s the University, avid for Pembroke talent. Any current or former College sports captain will understand the 1960 soccer skipper’s sigh of relief when ‘the stronger players, such as D.Perkin and B.Butler, fail their freshman trials.’

Over the last sixty years Pembroke has been more than generous in loaning out athletes of ability. In 1951 the College provided a third of the Blues rugby team and half of the pack. In 1969 we had a third of the basketball team and in 1972 three of the Modern Pentathletes. In 1974 we made up half the Boat Race crew and in 1979 University water polo would have been three men short if it wasn’t for Pembroke. Every year someone at Pembroke excels at Blues level in sports as diverse as (to offer some random examples) Ice-Hockey (D.G.Hobart 1959), Golf (W.G.Morrison 1964), Caneoing (P.S.Humm 1979), Karate ( J.J.Purcell 1989), Weight-Lifting (S.W.Garland 1993) and Orienteering (M.W.Collis 1999).

As if this wasn’t enough, we also supply sports stars to the nation, most famously the England cricket captain P.B.H.May. His appointment in 1955 was gratifying though hardly surprising, as he was in fact the fifth Pembroke man to captain England in the preceding 33 years (after F.T.Mann, A.E.R.Gilligan, A.P.F Chapman and F.G.Mann). This strong College showing was dryly exploited by Vernon Pennell, a Pembroke Fellow since 1914, in his Gazette appreciation of May’s achievement:

‘Probably no English captain since the days of the late Hon F.S.Jackson – not of Pembroke – has so captured the imagination of the English people.’

Before Peter May, A.P.Henderson had played rugby for England while an undergraduate in 1947. In 1953 J.P.K.Asquith kept wicket for Cambridge against the Australians, and a year later against Pakistan. Pembroke’s other internationals, while still at College, include N.M Forster and P.G.Clark, who in 1951 played hockey for England and Wales respectively, and G.H.Waddell, who captained Scotland against England at Twickenham in 1959.

As anyone who keeps in touch with Pembroke will know, they don’t make sporting heroes like they used to. When the College admitted women in 1984 there were grave fears for Pembroke’s sporting heritage. Only the Boat Club dared openly express their doubts, noting that ‘in the last year in which the PCBC has an all-male membership, it demonstrated its manly vigour and enthusiasm with significant successes.’ Boat Club nerves are still in evidence a year later, with the patronizing observation that ‘all Ladies’ crews gained places on the river, and places in the admiring hearts of many towpath supporters’.

Evidence of a less sickly attitude comes from the hockey field, with the Gazette’s first sporting reference to a female student by name. ‘Next year sees a break with tradition as Miss S.M.Butler has been appointed Second XI Captain for the 1985-86 season.’ Even the oldest former Pembroke sports-people will remember that captain of the second team is the most important position in any club, the player who holds everything together without fear or favour, or indeed much in the way of reward at all. The Squash Club, clearly a happy and welcoming ship throughout the eighties, is also quick to set up a Ladies team, led by Katrin Latta who ‘easily outclassed her opponents at this level.’ Julia Jowett, sometimes Julia and sometimes J.M., as the writers struggle with etiquette and instinct, becomes in 1986 Pembroke’s first University representative, in badminton.

The new teams quickly adapt, and already by 1988 the women’s cricket team is demonstrating its full assimilation to Pembroke sporting values by reaching the final of Cuppers. And losing.

The Boat Club, too, is soon put to rights. In 1994 the men’s eights are punished when not one boat makes a bump in the Mays. This is desperate, but the women’s eight moves up three places that year and by 1996 Erin Rose is PCBC’s first female captain and Catherine Bishop is rowing for Britain at the Atlanta Olympics. The women are Head of the River in 1997, again in 1998 and most recently in 2006. The patronizing reports have disappeared.

Other changes witnessed by the Gazette include the commercial sponsorship of College kit, first mentioned in 1991 when the footballers were supported by Russell Hume, the College ‘butcher’. The inverted commas are left unexplained. From then on, in nearly all sports, sponsors are routinely thanked, to the point where in 2001 the hockey team wins the league and their first expression of gratitude is to the sponsoring bank.

Over the years, the cricket club have been most consistently courteous in thanking the groundsman, as they should be because their tea depends upon it. In 1954 the cricketers make sure to credit Mr and Mrs Cousins, ‘again, for innumerable services’, and Stan Chown for his fine lunches. The Cousins were succeeded by Roger and Les Pearl, and it was in 1974 that the notion first surfaced of a Pembroke cricket wicket that was ‘better than Fenners.’ This reputation has been maintained by Pembroke’s current groundsman, Trevor Munns, the ‘miracle worker’. Whereas Mrs Cousins and Mrs Pearl provided teas, Mr Munns goes further and has represented the College on his own pitch, no doubt to the great relief of an undermanned captain.

These days the familiar figure of James Campbell no longer stalks the touchlines, as he did so faithfully over most of the last sixty years. It is now Michael Kuczynski who has taken on the often lonely task of providing crowd atmosphere, while the men and women of the College continue to battle against dubious referees and stronger opponents, giving everything for no greater reward than a team photo and some of the funniest times of their lives. As the light fades, and the weary blue shirts traipse once more from the field, everyone’s an eventual winner.