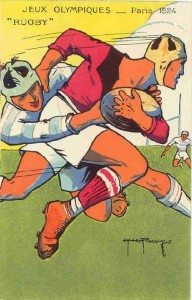 I’ve been trying to remember what happened on the school’s first overseas rugby tour, to France in 1984. And despite serious effort and middle-aged habit, I can’t honestly claim that things were better in the old days.

Spending a week in a disused police barracks outside Toulouse was not many people’s idea of fun, even then. Nor do I imagine, back in the twentieth century just as now, that many nutritionists or tourist board officials would have approved our welcoming dinner of boiled horse. There was also the challenge of braving deepest French rugby country with masters-in-charge who were experts in English and Chemistry.

Perhaps it was linguistic confusion, then, which had us playing local youth teams for whom everyone was eligible as long as they’d once been a youth. And finally, in the last and climactic game of our week-long tour, it’s hard to forget that we were marched off the pitch shortly after half-time to save us from bodily harm.

Strewth. It was a fabulous trip. So much so that after University I made my way back to France to play in the Championnat, an ambition first seeded in the bloodied mud of Toulouse. I discovered, thanks to that tour, that there was a wider world of rugby where I wanted to spend more time.

I loved the difference of it. By the end of the week, we had encountered many of the intriguing mysteries of French rugby. It turned out, unlike in Radley College Shop, that shorts came in other colours than navy or white. The first team we played were kitted out in eggshell-blue, the second all in yellow. The French teams were already so sponsored and glamorous they gave a glimpse of what rugby would one day become.

Even the balls were a novelty, only previously seen on the BBC at the Parc des Princes – the Wallaby leather balls with black tips, symbolic of all that was exotic and other about the French game. They had dugouts for the managers; they had managers. And we played every match under floodlights, for most of us a new experience.

That pioneering tour was not pre-season, but in the week between the end of term and Christmas. It was therefore a reward of sorts, though in many ways a rugby tour is like a variation on the old joke about the army. Travel the world, meet interesting people, and get beaten up by them. For those of us who were leaving after 7th term exams, it was an introduction to what the adult world of non-public school rugby might have to offer.

Rain, mostly. Torrential rain every day of the week. That was the first offering, but as Toulouse was a kind of pilgrimage nobody expected it to be easy. The pilgrimage idea came from Mr Waller, backs coach and rugby visionary, who was an early disciple of Pierre Villepreux, the former French full-back putting his innovative theories into practice at Stade Toulousain. These included heretical notions such as the mobility of prop forwards and the obligation of three-quarters to ruck and maul.

We played three times in a week, and I can’t remember whether we won or lost. I do remember how we played the game: fast and wide, converts of Radley’s honorary French flairiste, Monsieur Walleur. We soon discovered, however, that Villepreux’s ideas had been adopted at Radley College before they’d reached the Toulouse Colts.

For the final match of our tour, rain had closed the main Toulouse stadium. We were relocated to an outside pitch made primarily of water and gravel, the puddles silver in the floodlights, but for our first try we ignored the weather and sprung the rush defence with a long, unplanned cut-out pass to winger Tom Johnson. I’ll never forget it because I passed it. I was under the Villepreux-Waller spell. Everything was possible.

It was at the back of the next line-out that the Toulouse Number 8, the ball long gone, turned towards Chris Sheasby and calmly bopped him on the nose. It was entirely pre-meditated, almost apologetic, but from then on all sixteen forwards were repeatedly forgetting the ball to experiment with mayhem and violence. The backs did the double teapot and watched – at least no-one important was going to get hurt.

Can’t remember who won the fighting, either, though our mobile prop forwards were much better at running away. It was when our giant second-row Julian Beck started getting really angry that Mr Johnson decided to call a halt. Touring is partly about an encounter with real life, but you can have too much of a good thing.

Or can you? Late into the night, after the game, we were in town watching the Toulouse front-row bind together and rush aluminium garage doors with their heads. I’d never seen anything like it.

And we did in fact get to meet the legendary M. Villepreux. Before that fated final bust-up, we had lunch with the opposition. Now, there’s a hoary old story in rugby, nearly always associated with clubs touring in France. Both sides sit down to a slap-up meal, with wine a go-go, and then when it comes to game-time an entirely different home fifteen brightly take the field. I was recently assured by a younger OR that this had happened to us on our tour to France.

I’d love it to be true, but I doubt it is. That meal was more like a last supper, all of us very nervous. I remember a long table with, at the centre, Pierre Villepreux offering sermons on the penultimate man and the killer inside pass. Unfortunately, for those of us not taking French A-level, the guru might just as well have been talking Hebrew.

No such problems await in New Zealand, but hopefully other, equally stimulating adventures. I congratulate Niall Murphy and his squad on their ambitious choice of destination, and I can only admire a club that has held fast to the values of overseas touring after such an inauspicious beginning. May your lives be enhanced and your memories enriched! Allez les Rouges!