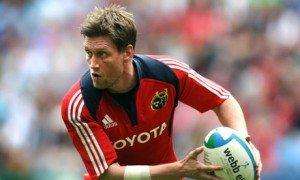 Yup, it’s on.  You the Munster faithful have the tradition, the genial company, the unyielding quest for (forward-based) excellence.  But I suspect the real reason Munster is most people’s second favourite European team lies with the Irish Pub.

It doesn’t matter where you are in the world, a Paddy Foley’s or a Molly Malone’s or a plain old Irish Pub will be showing the Munster games.  Support Edinburgh or Calvisano if you like (and I’ve a soft spot for both of them) but you’ll never get to see them on the telly abroad or, for that matter, in the knock-out stages of the Heineken Cup.

For the European Cup quarter final 2007, I’m a Gloucester supporter in Strasbourg, so naturally I’m in The Irish Times thirty minutes before kick-off to cheer on the reds.  My second-favourite team.  At first, this doesn’t seem a popular way of spending a wet Friday night in central Europe.  The pub is mostly empty except for some confused French couples who’ve come in for a pint of Guinness and a slice of Ireland.  They’re watching Ireland play cricket against England on the big screen, and thinking hurling isn’t half the game it used to be.  Mind you, the changes must have worked or it wouldn’t have become so popular in Guyana.

The UCC student behind the bar flicks over to the Sky preamble at Stradey Park.  It’s amazing.  The Red Army have taken over the stadium.  Ah, no.  Though at this distance I’m not sure I can tell the difference between red and scarlet.  Maybe in Llanelli they’re trained to know the difference from birth.

Before long, my Strasbourg pal Ashley, Cork born and bred, comes in with his wife Tara.  Asked to write something about the match for Red Alert, I’d wanted Ashley to be more of a mad Munster fan than he actually is.

‘You’re not even wearing the jersey.’ I say, immediately disappointed as he approaches the bar in muted Euro smart-casual.

‘The jersey?  Haven’t even got a proper accent anymore,’ Ashley says, though he does still have a proper regional thirst.  ‘My six-year-old daughter’s got the shirt,’ he says, taking the head off the evening’s first pint, ‘but when you’re away from the homeland things can go a bit pear-shaped.  She supports Biarritz.’

For dramatic effect, I wanted him to be the stereotype of a Munsterman, crying if Munster lost and buying us all drinks if they won.  In fact, it’s his wife Tara who’s genuinely into the rugby, and she’s from Belfast.  And even though Ashley and Tara are doing more for the cause of Irish harmony than, say, Trevor Brennan, I soon find out that the Ulster/Munster thing was never likely to cause any problems.  They’re united forever in an eternal dislike of Leinster.

I’m quickly brought up to date on the internal workings of Munster rugby.  Limerick provides the soul while Cork provides the spokespeople.  It’s ‘Stab City’ for the blood and guts; cosmopolitan, sophisticated, intellectual Cork for everything else.  I can’t say for sure, but there may have been some prejudice at work here.

But the match, the match.  The Sky commentators mention that tickets in West Wales have been changing hands for ridiculous prices.  Which seems strange from where we’re sitting, because at the Irish Times in Strasbourg you can watch it for free from a nice seat at the bar.  The Munster clamour is provided by nine students from University College Cork.  They’re on an Erasmus year in Strasbourg, and in the even-handed spirit of that wise Dutch humanist they work behind the bar while also providing most of the custom.  The girls are drinking that old Carrigaline standard – white Russian with mint – and the lads are in their Munster away jerseys because this year for them it’s always an away game.

These jerseys are blue and red.  Munster run on to the big screen in grey.  This is perhaps the first sign that things are not going to turn out well.

After nearly two decades of the Red Army marauding through Europe, this ghost-like grey requires a certain adjustment, especially for a neutral primed to support the team in red.  Though not that much of an adjustment.  Concentrate on the shorts and socks.  Black with white piping – that must be Munster, the same colour as the drinks.

Llanelli seem happy to exploit this unexpected crisis of identity.  They’re in the red and right from the kick-off they play like Munster, and have their first score on the board within five minutes.

Ashley decides we need more atmosphere, so rings up Kevin and Robby who are sure to be watching.  They’re out.  Llanelli score again.  We were hoping for a re-run of 2006 glory and end up watching a horror movie.  Nightmare on Cullen Street.  May even be a sequel.

‘C’mon Ronan’ the UCC students groan, and the Sky stats screen is now reporting back on Munster’s rare visits to Llanelli’s 22.  It seems an odd way to describe what’s going on, as if Munster just popped down there for tea.  From what we’ve seen, it’s not quite as friendly as that.

As half time approaches the Red Army in Stradey seem to have forgotten their responsibility to those of us watching on TV.  So it’s bad on the pitch, but you guys in the stand look every miserable point of the 17-0 down at the break.  We can see you don’t believe, like the guy with the red Cork City Council hat.  He’s had enough.

‘Breast-fed shovels,’ Ashley says, but I ruin it by being foreign and needing an explanation.  ‘Leaning on the shovels, breasts on the handles.  Best-fed shovels in all Ireland.’

Ah yes, the unmistakable voice of the Guinness talking.  Not that at this time of night it needs much encouragement, but the Guinness now decides it’s time to start a debate about whether Alix Popham dyes his hair.  The consensus is that it’s sunnier in Wales than most people realize, but his sideburns are definitely fake, stuck on with Velcro.

Seasoned supporters will recognize that talking rubbish is a valid and effective way to ease the pain, and already by the sixty-sixth minute the Munster fans in Strasbourg have become magnanimous in defeat.

And they do.  For those of you at Stradey Park it seems too much to bear, many of you adopting the crash position with hands on red hats.  Even in Strasbourg, it can’t be easy for a true believer, and one of the students disappears into the streets of Strasbourg, where the weather has come out in sympathy and is lashing it down.  Poor old Fionan in his outdated Munster away shirt.  He’s no doubt out there bashing his head against a fourteenth century beam in the pretty medieval streets of Strasbourg, and cursing the day coal was ever discovered in the Welsh valleys, colliery managers were recruited from English public schools, and rugby balls were brought to a region full of strong fierce men with a point to prove who created a proud sporting tradition that lasts to this day.  Dammit.  It could all have been so different.  No coal in Wales and Munster would now be safe in the semi-finals.

Back in the bar, the Munster lads have explanations.  An Englishman at this point might be saying oh dear, oh dear (or words to that effect sometimes spelt with an f), but the Munstermen are muttering O’Connell, O’Connell, and the difference the big man might have made.  The grey jerseys come in for a bit of a pasting, and grumbles about Manchester United trying the same thing and losing 6-1 to Southampton.  Players couldn’t see each other, apparently.

A guitarist starts up with Knocking on Heaven’s Door, the TV switches back to hurling from the Caribbean, and for the next few hours I find out more about Gaelic football than I possibly needed to know.  We also discuss Clonakilty, snow on the beach, and squirrel stew, while discovering that Guinness and pastis is much under-rated as a mixture of drinks.

By the time we leave, in this city of pavement cafes and sauerkraut restaurants, we unanimously agree that this business of going to a pub on a rainy Friday night and watching rugby and drinking stout and yakking with strangers is an idea whose time has come.  You should try it in Ireland sometime.  I’ve a feeling it might catch on.