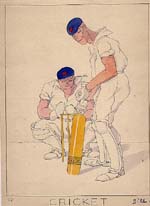 One hundred and thirty years ago, when English sportsmen first sailed to Australia to play cricket, their supporters back home were the same people who a generation earlier had been equally keen on brutal animal events like bull-baiting.  This was the popular spectacle that made the British bulldog a national emblem, for its tenacity in seizing a bull’s testicles. Between its teeth.

Regrettably, painfully, for most of the last two decades, at cricket the English have been the bull and the Australians the dog.

Despite the heroics of last summer, anyone who’s been paying attention expects Australia to win the Ashes series that starts next week. They have a psychological advantage simply because they’re Australian, but it wasn’t always this way.

Until recently, Australians were alleged to suffer from the Cultural Cringe, a term coined in the 1960’s to describe Antipodean insecurity when faced with centuries of European achievement.  The Cringe came in two forms: Direct and Inverted.  The direct version explained the Queen as head of state.  Inverted, it became the ocker Australian male flaunting his assumed grossness of character:

There was, however, a cure.  Australian sporting victories were supposed to help banish such feelings of inadequacy, and in world-beaters like Donald Bradman the Australian people could appreciate some unique and superior quality invested in a fellow Australian.  Or as Thomas Keneally later wrote: ‘While no Australian had written Paradise Lost, Don Bradman had made a hundred before lunch at Lord’s.’  This was, by implication, beyond the abilities of English poet John Milton, and not only because Milton was blind.

Bradman was then followed by an impeccable sequence of winners.

These, and many more like them, were the battling culture heroes, who by defying all odds to win across the globe gradually fostered a sense of shared Australianness.

In the twentieth century this theory may have convinced, Australians offsetting the cultural cringe against unrivalled sporting excellence.  But times change.

In 2003 at Upton Park, the England football team were humbled 3-1 by the Socceroos.  At that match the Australians in the crowd held up a banner saying: ”If we win, you suck at everything.”  The Cringe had swung so far across the hemispheres that this banner referred to far more than sport.  It meant we sucked at Booker prize-winning literary novels and female impersonators and show-ring feminism and wise-guy TV presenters and infinite daytime soaps.

The Australian Cultural Cringe has disappeared, to be replaced, on the British side, by a new and chronic condition.  The Recreational Cringe.  That’s what it is, that’s what we have.

Now that leisure can count for more than culture, the Australians have what we want.  Wherever in the world they started out, Australians have the gift of picking themselves up and starting afresh, a talent for re-creation, a bundle of positive present-day virtues that make for a better film of the book of the life.  Confident, famously without worries (mate), they excel at the here and now.

Which is likely to come in useful next week in Brisbane, with the score at 40 for 3.  I’d like to be wrong, but England’s victory in 2005 already shines like a glorious exception.  The Cringe is back, and yet again we’re the ones feeling inadequate and in need of victory, and if last time round you woke up to the radio and groaned at the morning scorecard from the Gabba, you’ll know exactly what I mean.

[sound archive – Jonathan Agnew’s first Test, first day Radio 5 report of the 2002 tour.  It goes something like: ‘We thought it might be bad.  Nobody imagined it would be as bad as this’.]