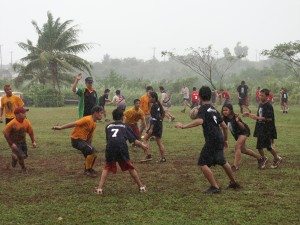 We have the 6 Nations. Guam has the True GRIT 10’s.  Richard Beard brings back the good news

‘If you build it,’ (to paraphrase the disembodied voice in the Kevin Costner film Field of Dreams), ‘they will come.’

On the Pacific Island of Guam, 3,000 miles west of Hawaii, the Guam Rugby Club have built an impeccably grassed, automatically-irrigated, international-sized rugby field.  It has stands, scoreboards, lights – and a fringe of palm trees as a natural barrier against the jungle.  This is Wettengel Rugby Field: one of the most distinctive rugby venues on earth.

And, fulfilling the second part of the equation, here come the players: the Budweiser true GRIT 10’s has hosted teams from Australia, Japan, Hong Kong, Saipan, Korea, and of course Guam itself. 6 Nations, and counting. So why is this achievement so special? A mere eight years ago, the island of Guam had no rugby at all, no club, no pitch.

The field and the tournament are a tribute to rugby’s ability to inspire dozens of otherwise sane men and women to contribute hours of time and effort for nothing.  This miracle is the work of many hands, but I ask Ross Morrison, a New Zealander who was in on the project from the beginning, how it all started.  A former Northland hooker, he looks fit and tanned, and has a habit of widening his eyes until the entire blue pupil is visible. He does this now, as if I’m an idiot.  ‘Mate.  We love rugby.  We want to share the game.’

‘The 10’s is the highlight of the rugby year,’ he says.  ‘The great thing is to get rugby going here for everyone.  Get the youngsters to play.’  He is carefully watching, with narrowed eyes, the warm-up of Guam’s first-up opposition, the All-France club from Tokyo. ‘It would also be good to win.’

The French, like the other teams, have been tempted here by the tournament’s promise of ‘rugby in paradise.’ Alas, from the way they’re groaning through their stretches, they seem to have fallen for that oldest of rugby tricks: the irresistible good cheer of last night’s welcome party.  As the French take to the lush grass of the Wettengel Field, more bad news: blowsy show-off clouds bluff the leaves of the pitch-side palm trees, and suddenly the tropical rain comes in, direct and relentless. In shock, the French go down without scoring, then honour the hard-tackling Guam side with a brief rendition of Elle aime à rire, elle aime à boire.  Not a song previously well-known in these parts.

The rain-clouds linger throughout the first day of the tournament, and why not?  They have a week to kill before their annual visit to Murrayfield and Lansdowne Road. While the senior sides fiercely compete their pool games, the local youngsters find a free area of turf where they step and slide, soaking wet, loving every minute.

Last year, to maintain rugby’s astonishing progress on the island, Ross Morrison flew down to Australia to find a Youth Development Officer. He came back with Anthony Keenan, a 28 year-old from the Queensland Rugby Union. Anthony has this type of rugby in his blood – his grandfather was a Wallaby who paid his own fare to play a Test Match in New Zealand.

The decision to hire Anthony is already paying dividends: in April, touch rugby will become an official inter-scholastic sport in eight of Guam’s Middle Schools.  These are impressive results, and this year for the first time the Shell Youth League is an integral part of the True GRIT 10’s. Fifty children in four teams will play over two days for an overall winner.

Meanwhile, in the senior tournament, Guam Rugby look fit and well organised. The spectators on the bleachers, however, are in awe of the flashing Sumitomo Samuraiz, top seeds, for whom no pass or double-dummy switch with triple loop is ever too flamboyant.  The Samuraiz also have pace: they look unstoppable.

On the competition’s second day, the home-built irrigation systems drain away the monsoon, and the brochure-blue skies are back.  The rugby now has a harder edge, not least because Guam must overcome Para Todu, the Island’s other club. According to local mythology, the Guam club is dependant on fanatical incomers and training, while Para Todu are islanders with natural flair.  This caricature could well last a hundred years, even though it’s not entirely true.  What matters is that these two clubs are up and running and bashing each other to bits, for the sheer pride of the thing, until it always was and always will be.

The Guam club survive, and then clinch a nervy semi-final before their ultimate challenge: the Samuraiz.  It’s the final, at stake the Budweiser Cup, and the powerful Guam ten display a blood and guts intensity which overwhelms Sumitomo with something to spare.  One of Guam’s winning tries is scored in the corner by a diving Haldre Rogers, a snake-catcher and scrum-half from New York via Cardiff University.  The extraordinary Haldre is 25 years-old and a woman and the tournament’s Most Valuable Player.  Rugby is nothing here if not inclusive.

The  Sumitomo captain, Yoroi Atsushi, is both gracious and a little surprised in defeat. ‘Very good team,’ he says, ‘they train very much!’

Guam’s President is still breathless from the club’s first ever triumph in their home 10’s.  ‘It’s awesome,’ he says, ‘and it’s been so long. We looked at the juniors playing while we were warming up, and we said ‘this is for them’.  It’s just brilliant for the future of the club.’

This exuberant rugby activity on a small Pacific island might seem insignificant, especially against the raucous background sound of the all-singing 6 Nations. Indeed, the entire population of Guam would fit comfortably into the three stadiums used on any one weekend of Europe’s flagship tournament.

However, this flourishing rugby community has developed exclusively in the professional era: Guam can offer a valuable lesson in how to develop the game globally in the twenty-first century. The Guam Rugby Club has succeeded in blending traditional virtues: commitment, hard work, players and members volunteering skills and time (in return for a huge amount of fun), with a clear-eyed vision of how best to exploit partnerships with business and government.

The money for the impressive Wettengel Rugby Field, for example, comes largely from a $75,000 sponsorship deal with Budweiser. The club has involved Shell in junior rugby. Continental Airlines flies in the referees.

Budweiser, to take just one of these major sponsors, is not small beer. In 2003, six years after their first involvement in Guam, Budweiser’s parent company Anheuser-Busch announced a two year sponsorship of USA RUGBY, including the national team. Executives move around.  After an experience like Guam, they’ll take a lifetime passion for rugby to wherever they next end up.

And the Guam Rugby Club have only just started. They have planning permission for a second pitch, and a vision of the future in which the youngsters now playing touch will create up to six senior teams. An island league will then feed players into a national squad which can compete throughout the region.

The rugby people of Guam have achieved miracles, and not small ones, either. For their trouble, the Guam Rugby Union received this year from the IRB the sum of £5000. ‘We’re not asking for the world,’ Ross Morrison tells me, ‘all we want is a fair shake.’

Ross believes they could fund a full-time youth development officer for as little as £15,000.  They could then get someone like Anthony Keenan into High schools as well as Middle schools, and keep this tremendous momentum going.  All they ask is this pinch of seed money, to compliment the actual grass-seed already paid for and planted on Guam’s existing field of dreams.

This region of the Pacific is known as Typhoon Alley.  Occasionally, a big wind comes and blows everything away. At the end of 2002, Super Typhoon Pongsoona devastated Guam, but somehow the rugby posts on the miraculous Wettengel Rugby Field remained upright.  Rugby is here to stay.

For information about next year’s 2005 True GRIT 10’s, contact Peter Walls on info@guamrugby.com