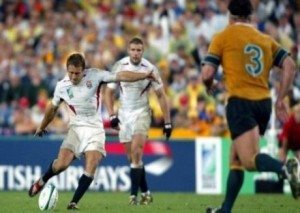 It mattered so much, and it turned out so well. I don’t know which was harder to believe, that England won or that it could matter so much in the first place.

Whatever the differences between Australia and England as nations, this week has proved that we have one fundamental weakness in common: we get far too uptight about sporting fixtures. But at last, after so long, in this area of human behaviour known as sport, we have managed to behave more successfully than the Australians.

If it sometimes seemed, in the excitement of yesterday’s final, that the identity of each individual spectator and ultimately of the nation was involved as a side bet, then perhaps that’s because it was. Throughout the week-long build-up to yesterday’s game, in both countries, the predictable reason for the intensity of this fixture was duly paraded.

The Australians even brought it bald and naked to the final. As the players ran out, the Channel Seven commentator told us ‘Here they come! It’s the Homeland versus the Convicts!’ According to this most basic of oppositions, we were about to be treated to a clash between two different mentalities, two types of stubbornness. It was those who stayed behind in grim old England against those who gave it a go on the other side of the world in hostile and treacherous conditions.

The edge to this rivalry involves the most basic of human questions: what’s the best way to live? Staying put? Or moving on? We resent them because they seem to be getting on (Bondi Beach was supposed to be a punishment). They resent us because we made them leave in the first place.

Until yesterday, if sport is any measure, we could be forgiven for doubting the English virtue of digging in. The decadence of the English athlete was beginning to seem irreversible, and had been since at least 1905, when the Daily Mail wondered aloud whether ‘the colonial is born and bred on a higher mental and physical scale nowadays as compared with that at home?’  We were indeed the old country, with gammy knees and a dodgy back, and a psyche fuddled by age and consistent defeats. Sports psychologists then confirmed this view, suggesting that desirable traits in a sporting winner include aggression, drive, confidence, and general extroversion.

In fact, most of the genetic qualities needed to thrive in the hostile territory of Australia. During the early stages of yesterday’s game, the doom and destiny of this genetic inheritance seemed horribly plausible. Neither Matt Dawson nor Ben Kay had the confidence to score with the line begging. They probably weren’t aware of it at the time, but it was their genes.

The Englishmen were more likely to be cautious and wary than their Australian opposition. Deep at heart, our first-choice scrum-half and lock, like the rest of us, are stay-at-homes.

Clive Woodward’s England team in Australia, for the first time in my adult life, chose not to believe in this or any other excuse for frailty. And quite right, too, because these simplistic distinctions have been muddled by time and immigration, creating a far richer brew of psychological possibilities. It seems highly unlikely, for example, that the great-grandparents of our best player in Sydney on the night, Jason Robinson, had anything to do with sending convicts to Botany Bay.

Which isn’t to say that the rivalry isn’t real. Anyone following yesterday’s match felt it to the point of emotional exhaustion.

The edge was perhaps honed by the more recent history of the twentieth century, and one aspect of our fabled English arrogance is the assumption that there’s no genuine ill-will between us and our former colonies. We conveniently forget Gallipoli and Singapore and our decision to enter the European market rather than favour trade with the Commonwealth.

Against this background, sporting victories became immensely important in forging a shared sense of proud Australianness in the past century. In fact, they were so successful that in the 1950s, the US magazine Sports Illustrated was in awe of Australian sporting culture – ‘When you consider what the Australians have managed to do in the intensely competitive field of international sport against nations with huge populations, it simply staggers your comprehension’.

More recently, then, with Australia established as a sporting superpower, roles have been reversed. In the past 20 years the English could legitimately feel a grievance, a sense of sporting undernourishment and the need for refreshed identity through victory.

This longing was fuelled by weak submission to the Chappell and the Ella brothers, or losing 76-0 in Brisbane only five short years ago. It had little to do with convicts, more with Steve Waugh, and Harry Kewell at Upton Park. It may be, in the accelerated momentum of sporting history, that Australia’s overbearing sequence of success was creating a resentment to equal England’s problem with real history. Before the match, when I asked an Irishman the impossible question, he told me he wanted both sides to lose.

For all last week’s bustle and noise in the press, neither team before yesterday’s epic contest engaged in the phoney war of words. Both teams had faith in the eloquence of their game on the pitch, in the mud, in the rain, a collision of unyielding wills in pursuit of the one final prize. Both teams had trust in the sporting battle, and reaching into their endless reserves of courage, surprising even themselves, they needed no extra motivation from history or basic cultural expectations.

Over the course of 100 minutes, those players by their own efforts demonstrated what is valuable and lasting about this sport that has scrambled not quite intact from the brawl of medieval England. They gave everything. One team won, one team lost, but the rivalry continues enhanced, not diminished.

If it’s any consolation to the Australians, they can take some comfort from another famous loss at home, at The Oval in 1882, which caused the Sporting Times to print its famous obituary lamenting the death of English cricket. The Ashes turned out not to be the death but the true birth of one of the oldest and most keenly fought contests in sport, a source of continuity and inspiration to the English-Australian rivalry for centuries still to come.

The Australian captain George Gregan was unfailingly generous and gracious in defeat. Perhaps he too knows that yesterday’s result on home soil is not an end, but like Frederick Spofforth’s game more than 120 years ago, a beginning. Perhaps even the historical touchstone of a sport now set to spread rapidly across the globe – rugby union, as played by the Australians and Englishmen who shone so brightly in yesterday’s unforgettable final.